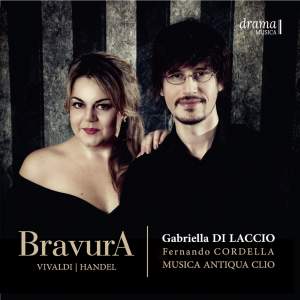 Opera in the eighteenth century was dominated by the singer: they were the first celebrities, described as ‘stars’ in their own day, and capable of earning salaries that would, today, put them in the same league as footballers. In the eighteenth century arias displaying virtuosity were favored, and the aria di bravura and the aria d’agilita were born as categories for measuring a singer’s worth. Introducing Brazillian soprano Gabriella Di Laccio, director Fernando Cordella and period Ensemble Musica Antiqua Clio, Bravura plays tribute to the great Baroque composers Handel and Vivaldi with this varied program presenting virtuosic arias and instrumental pieces from the Baroque period. This release features pieces originally sung by some of Handel and Vivaldi’s favorite singers like Anna Giro and the great diva Francesca Cuzzoni; as well as by some new revelations of the time like the castrato Mariano Nicolini and the celebrated female musicians of the Ospedale della Pieta.