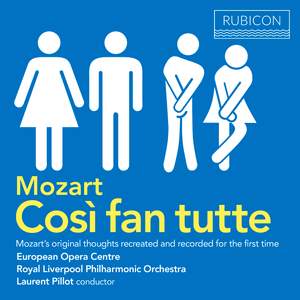 Mozart’s original thoughts recreated and recorded for the first time.

Aria "In uomini, in soldati"(Despina)

A Cosi with a difference: studies of the composer’s manuscript by Ian Woodfield reveal that Mozart was undecided whether to ‘cross’ the lovers or keep them uncrossed. Key passages are altered often to startling effect – Ferrando opens the opera singing ‘La mia Fiordiligi’ and not the usual ‘la mia Dorabella’. Phrases such as ‘Rivolgete a lui lo sguardo’ (Turn your gaze upon him) appear in Mozart’s own catalogue as ‘Rivolgete a me’ (Turn you gaze to me) , and although ‘lui’ is in another hand, Mozart had left blank spaces to be filled in later – an indication of his indecision about the pairings. This brilliant aria, cut from the final version is restored in this performance. With the reinstatement of the brilliant ‘Rivolgete’, Guglielmo is in a position to cede his large Act II aria ‘Donne mie’ to Don Alfonso who, unusually for a major character in an opera buffa, has no true aria, his tiny arioso in Act I (‘Vorrei dir’) being little more than a comic caricature. With no opportunity to reveal himself in an extended musical statement, he remains an aloof figure, a philosopher, a puppet master controlling the experiment. Although ‘Donne mie’ presents a misogynist ‘overview’ of the behaviour of women, its performer at least claims to like them. In that sense, ‘my ladies’ receive a slightly ironical and patronising defence in the manner adopted by this character in his summation of the outcome of the experiment in ‘Tutti accusan le donne’. As sung by Guglielmo, however, ‘Donne mie’ can only be taken as a generic aside, since it expresses a view of women diametrically opposed to the one he is advocating so robustly in the main drama.

In the climactic duet between Ferrando and Fiordiligi, indecision is again to be seen precisely in the use of pronouns. It makes a big difference to Ferrando whether he is attempting to seduce his own lover or Guglielmo’s. As he sees Fiordiligi about to waver, he is suddenly unsure as to how he should react; Fiordiligi recognises that her constancy is under threat, but in the balancing phrase, Mozart could not decide whether Ferrando should refer to her constancy (‘la sua costanza’) my constancy (‘la mia costanza’) or even your constancy (‘la tua costanza’). There are multiple crossings out. At the end of ‘Come scoglio’ when everyone on-stage is reeling from the ferocity of Fiordiligi’s dismissal of the men, one of them has to take the lead in attempting to detain her. As the two men are still working as a pair, it was perhaps thought not to matter much, but if it did, then clearly the man setting himself up as Fiordiligi’s future partner should be the one to address her. Mozart had a double change of mind at the start of the ensuing recitative ‘Ah non partite!’ (Ah, do not leave!), setting these words first for Ferrando, then for Guglielmo and then for Ferrando again. Obviously the choice did have some significance.

The young singers acquit themselves well. Nazan Fikret projects bell-like vocal clarity in ‘Come scoglio’, Héloïse Mas is commendably secure in ‘Smanie implacabili’, and Alexander Sprague performs with buffa-esque panache throughout…Like the plot of Cosí, this new version is an interesting ‘experiment’, but as with the original there are unsettling results.

Pillot conducts with superb energy and grace, and there’s some elegant playing from the Royal Liverpool Philharmonic, whose woodwind sound [is] particularly lovely here. The student ensemble cast is similarly strong…best of all, perhaps, is Biagio Pizzuti’s Guglielmo, his voice warm and mature, his characterisation wonderfully subtle: he’s as good as, if not better than, many big-name singers who have recorded the role…Anyone who cares about Cosí should hear this.

Generally this is an accomplished, musically sensitive performance given by a young cast containing some potential future stars, all of them possessing voices of some quality.

Recorded live at 2014 performances by the European Opera Centre, it offers accomplished and youthful performances from its cast, and enjoyably propulsive conducting from Laurent Pillot.