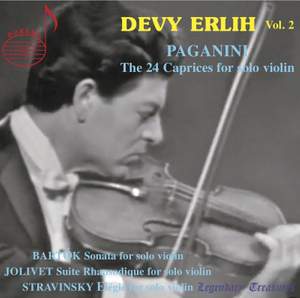 Born in Paris on 5 November 1928, to a musical family – Moldovan Jewish immigrants – young Devy Erlih was soon recognized as an outstanding talented prodigy. The family made it through the WWII German Occupation and after the war Erlih continued his studies. He won the coveted Paris conservatoire Premier Prix and his career as a violin soloist began.

In 1955 Erlih won the International Long-Thibaud competition and subsequently toured throughout Europe, America and Japan. In addition to his vast standard classical repertoire, he became a champion of contemporary composers including Bartók, Jolivet, Dutilleux, Martinů, Milhaud, Sauguet, Maderna, Ropartz, Tomasi, LeJet, Jacque Charpentier, Denisov, Julien Falk, Paul Le Flem and Loucheur. Many composers wrote concertos or sonatas for him. He combined the raw gipsy music styles of his Balkan heritage with the refined elegance of the French violin school and his recordings are highly sought after by collectors. Erlih was also a noted teacher and was on staff at the Paris Conservatoire. In 2010 he was the president of the Jury in the Long-Thibaud competition. Devy Erlih died in Paris in a road accident on 7 February 2012.

All items are first time on CD.