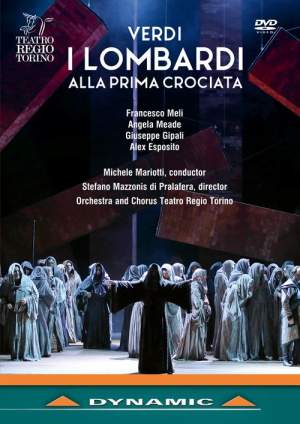 Meade may not offer such vivid Italian as her colleagues, but she knows what she’s singing about, possesses abundant technical skill and is grand in expression…Of the three principals the finest... — BBC Music Magazine, February 2019, More… 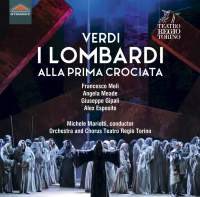 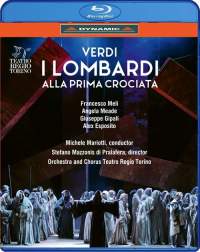 I Lombardi alla Prima Crociata is an operatic drama in four acts by Giuseppe Verdi to an Italian libretto by Temistocle Solera. The work is based on an epic poem by Tommaso Grossi, which was “very much a child of its age; a grand historical novel with a patriotic slant.” Verdi dedicated the score to Maria Luigia, the Habsburg Duchess of Parma, who died a few weeks after the premiere. "I Lombardi best encapsulates the spirit of the Italian people’s desire for nationhood. One would be pleasantly surprised, full as it is, of rousing choruses and musical numbers of great beauty, with music wonderfully expressive and perfectly in accord with drama at times. Visually and musically a sumptuous staging, full of contrasting colors and glorious singing for this young Verdi's rare work." (review by Alan Nelson / Operawire). American soprano Angela Meade and the Italian tenor Francesco Meli star in the main roles of this production, which is conducted by Michele Mariotti and was recorded in April 2018.

Meade may not offer such vivid Italian as her colleagues, but she knows what she’s singing about, possesses abundant technical skill and is grand in expression…Of the three principals the finest is Alex Esposito’s Pagano – a villain-turned-holy man, the complexities of whose ambivalent character are skilfully observed both musically and dramatically.

“Best of all is Angela Meade’s Giselda... she rips excitingly through the role’s challenges, bringing the house down with a thrilling Act II aria.”