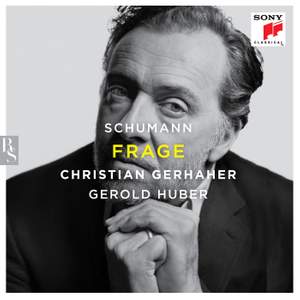 Both in his musical and literary responses, Christian Gerhaher leaves nothing unquestioned. Each word is weighed. Each note calibrated. Yet for all that, seemingly spontaneous and instinctive,... — BBC Music Magazine, March 2019, 5 out of 5 stars More…

"Frage" is the new album by sensational baritone Christian Gerhaher. This new album is the first of many highly anticipated projects to record all of Robert Schumann’s songs. This project will be the first time since the 1970s where a singer has devoted themselves to comprehensively perform and record Robert Schumann’s complete lieder output. Frage is produced by the Bayerischer Rundfunk and the Deutsches Liedzentrum Heidelberg. Also featured in the project are fellow singers: Wiebke Lehmkuhl, Sybilla Rubens, Camilla Tilling, Julia Kleiter and Martin Mitterutzner as well as pianist Gerold Huber. Christian Gerhaher is set to perform at the prestigious Wigmore Hall in London on January 16 2019. He has won many awards including the Laurence Olivier Award for Outstanding Achievement in Opera and the Midem Special Prize.

Both in his musical and literary responses, Christian Gerhaher leaves nothing unquestioned. Each word is weighed. Each note calibrated. Yet for all that, seemingly spontaneous and instinctive, the result is neither overegged nor loses sight of the overarching impulse. When it comes to line and shading, resolute truthfulness is all.

Accompanied by his regular partner in song, Gerold Huber, he achieves a near-perfect synthesis between words and music, singing his native German poetry with an eloquence that would be hard to surpass today, or at any time.

The voice is still extraordinarily beautiful…Huber’s piano-playing, meanwhile, is a constant marvel of sensitivity and control. In every bar you can sense the closeness of the partnership…Perhaps the greatest achievement, though, is that all this care and attention is worn so lightly: Gerhaher and Huber achieve an almost alchemistic feat in making so much artistry feel so natural…This is an album to treasure and to savour – and to listen to again and again.

This first instalment of Gerhaher and Huber’s complete Schumann series is hands-down one of my personal favourites of the year – the quiet heartbreak of the lovelorn window-cleaner and gardener in the Op. 107 songs brought tears to my eyes, whilst the new muscularity which made Gerhaher such a compelling Amfortas earlier this year pays dividends in the sharply-etched drama of Die Beiden Grenadiere.

There is no doubt that Schumann brings the very best out of [Gerhaher]...there is no sense of any kind of routine on this album. Such freshness is as obvious in his performance of some of the slighter numbers as it is in the authentically great songs of the Kerner set, the best of them as fine as anything in Dichterliebe.