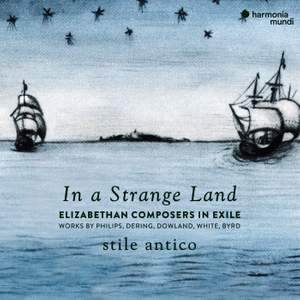 Offer, In a Strange Land

Unsurprisingly, refinement abounds, though sometimes at the expense of ‘bite’. — BBC Music Magazine, March 2019, 4 out of 5 stars (Performance) / 5 out of 5 stars (Recording) More…

Dowland: In this trembling shadow cast

Watkins, H: The Phoenix and the Turtle

The regime of Queen Elizabeth I dealt harshly with supporters of the old Catholic religion. Torn between obedience and conscience, some of England’s most talented musicians - Philips, Dering and Dowland - chose a life of exile abroad. Others chose to remain in spiritual isolation in England, comparing themselves to the exiled Israelites in Babylon.

Amongst them were Robert White, whose five-part Lamentations are one of the glories of English music of any age, and William Byrd, whose anguished Catholic music is referenced in Shakespeare’s enigmatic poem The Phoenix and the Turtle, vividly set by Huw Watkins especially for Stile Antico.

Unsurprisingly, refinement abounds, though sometimes at the expense of ‘bite’.

Stile Antico, as ever, excel in plangency…[in Byrd’s Quomodo cantabimus they] allow the texture to unfold with a gentle flow in what is some superb singing but I long for a more treble-dominated balance for such pointed texts. They find this is Huw Watkins’s setting of Shakespeare’s The Phoenix and the Turtle. Here, especially towards the end, they employ the sort of energy I would love to hear them bring to Byrd.

The conductorless British vocal ensemble are in their element with this thoughtfully-assembled programme exploring music by Elizabethan composers who found themselves literally or figuratively estranged from their homeland due to their Catholic sympathies; Robert Dering’s Factum est silentium showcases their springy agility and immaculate ensemble, whilst Huw Watkins’s new setting of Shakespeare’s The Phoenix and the Turtle had me craving more contemporary music from this source.

The dozen voices of Stile Antico give achingly expressive performances of Elizabethan masterpieces, all informed by their composers’ Catholicism, steadfastly maintained under a Protestant regime.

In a Strange Land: Elizabethan Composers in Exile (Harmonia Mundi) is the latest collection, released with unerring timeliness, from Stile Antico, the 12-strong ensemble whose name signals tonal purity, precision and musical intelligence. The theme is spiritual and political disjuncture

Stile Antico excel in everything they sing, but for the yearning melancholy of William Byrd they always seem to reserve something particularly special, a balm for the troubled soul.