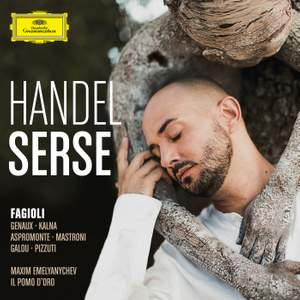 I’d guess that a voice like Franco Fagioli’s…comes as close as we can get today to the mingled brilliance, suppleness and power of the great castrati in their pomp… few if any falsettists today... — Gramophone Magazine, February 2019 More…

"Signor, Signor, lasciate far a me"

"Dirà che amor per me"

The first recording of the opera with a countertenor in the title role! Serse is one of the most popular Handel operas; it is set in Persia (modern-day Iran) about 470 BC and is very loosely based upon Xerxes I of Persia. Serse, originally sung by a soprano castrato, is now regularly performed by a mezzo-soprano or countertenor.

The Italian libretto has a fascinating history, because it is based on one by Nicolò Minato from 1654 and was later adapted by Silvio Stampiglia (for an opera by Giovanni Bononcini in 1694). It is however unknown who eventually re-wrote the libretto for Handel. The three-act opera was premiered in London on 15. April 1738 at the Londoner Kings' Theatre and sadly had no success at all. After 5 performances they had to take it off the schedule and the opera was forgotten for almost 200 years! The famous opening aria, "Ombra mai fu", sung by Serse to a plane tree (Platanus orientalis), is one of Handel’s best known melodies for its outstanding beauty.

I’d guess that a voice like Franco Fagioli’s…comes as close as we can get today to the mingled brilliance, suppleness and power of the great castrati in their pomp… few if any falsettists today could match his combination of temperament and vocal glamour in this notoriously taxing part. The rest of the cast easily hold their own in vocal lustre and dramatic immediacy. [Il Pomo d’Oro’s] eagerly responsive, high-octane playing underpins the whole performance.

The two big set-pieces become in Fagioli’s hands dazzling outbursts of technical brilliance and coloratura anger, glittering meteor showers of passaggi, trills and ornamentation acrosss a gamut that extends down to chest notes of unusual strength…There is, it must be said, a sense of the febrile about the performance that gives cause to wonder how well if might wear in the long term. But for now I can only rejoice and relish what is the most enthralling Handel opera performance to have come my way in some time.

Emelyanychev elicits fabulous energy and impetus from Il Pomo d’Oro throughout; Fagioli (the first countertenor to tackle the title-role complete on record) is little short of astonishing in the Persian king’s bravura outbursts of jealousy, but also brings real pathos to his more introspective moments, and is well contrasted with Vivica Genaux’s cool Arsamente and Delphine Galou’s fiery Amastre.

In the title role, Franco Fagioli is on his top form, the tone refulgent and the technique solid. Vivica Genaux can be relied upon to excite with her lithe and athletic mezzo, and her Arsamene duly does. To single one performer out is perhaps unfair, but Inga Kalna makes a stunning Romlida and her voice has many colours: she can spin a langorous line with creamy tone, or trip through exciting coloratura. She provides real sit-up-and-listen moments.