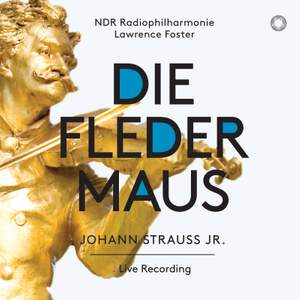 Act I: Did I Miss Something? (Live)

Act I: This Is Unbelievable... (Live)

Mussorgsky: Mephistopheles' Song of the Flea

Die Fledermaus (1874) is the ultimate Viennese operetta, composed by Johann Strauss Jr., the most famous member of the Strauss Waltz Dynasty. Once conceived as an attempt to creatively outgrow the dance-hall, the operetta was a huge success from the outset and still enchant audiences today with its unmistakably Viennese mix of comedy and sophistication and its uplifting waltz rhythms.

This live recording is imbued with a specifically Viennese charm thanks to the inclusion of dialogues written by tenor Nikolai Schukoff, who also sings the role of Eisenstein.

Orchestra and conductor both have a vast PENTATONE discography, including a recording of Johann Strauss Jr.'s Der Zigeunerbaron (2016)