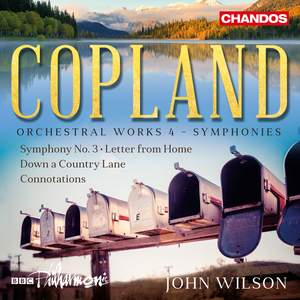 Symphony No. 3, Letter from Home, Down a Country Lane & Connotations

Sonically, the Chandos recording [of the Symphony] has enormous impact…But the interpretation itself is too soft-grained and often oddly tentative…Wilson and the orchestra are far more successful... — Gramophone Magazine, December 2018 More…

I. Molto moderato [With Simple Expression]

Copland: Down a Country Lane

Chandos's superb survey of the American composer's orchestral music with the BBC Philharmonic continues to raise the roof as the Fanfare for the Common Man returns transformed.

‘I hope you will knuckle down to a good symphony’, wrote Samuel Barber in September 1944 to his fellow composer Aaron Copland: ‘We deserve it of you, and your career is all set for it.’ It was a strange thing to say given that Copland had already composed a variety of symphonies, albeit admittedly all more experimental than Barber might have preferred. The fourth volume in the highly acclaimed Copland series from John Wilson and the BBC Philharmonic opens with the resoundingly successful Symphony No. 3 (1944 – 46). The optimistic spirit of this work resonated perfectly with the euphoria of post-war America, resulting in its becoming an emblem of US nationalism. This lesser-recorded original version comes complete with the twelve bars which Bernstein later suggested cutting from the fourth movement.

Sonically, the Chandos recording [of the Symphony] has enormous impact…But the interpretation itself is too soft-grained and often oddly tentative…Wilson and the orchestra are far more successful in Connotations…Here, there’s urgency and rhythmic vitality in abundance, yet the interpretation as a whole is more refined and varied than Bernstein’s…Wilson’s performance is the most compelling and imaginative we’ve had yet.

A spectacular recording of the Third Symphony and other, less well-known works.

Rather than softening [Connotations's] edges, Wilson shines a dazzling spotlight on them from the off...It’s in the final movement [of the Symphony], though, that Wilson’s well-documented gift for making familiar Americana seem fresh-minted really comes into its own...I was half-expecting Wilson to play the triumphal blazing climax as a Shostakovich-style hollow victory, but in the event it comes off with open-hearted warmth that’s profoundly moving without ever suggesting bellicose optimism.

Wilson’s empathy with this music is infectious.

[Symphony No. 3] The Chandos recording really shines in the lively, sparkly second movement. Overall, this is an intense performance, with the ‘Fanfare for the Common Man’ emerging as a vital part of the piece (we really feel Copland’s structural mastery at its re-emergence at the end). Throughout, Wilson clarifies the complex textures well; only in the finale one hankers for a little more depth of sound.

This is surely one of the more valuable orchestral series of recent years.

The fourth volume of the highly acclaimed series in which John Wilson and the BBC Philharmonic explore the composer’s major orchestral output.