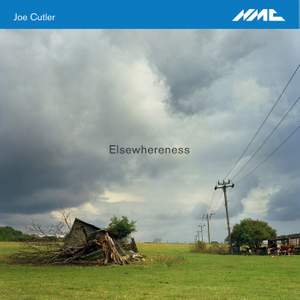 [Karembeu’s Guide] is finely played by Emulsion Sinfonietta – as are all these works – never glossing over textural intricacies and confirming the regard in which Cutler is held. For those yet... — Gramophone Magazine, January 2019 More…

Joe Cutler's debut portrait album Bartlebooth was released on NMC in 2008 and was one of Gramophone Magazine’s Top 20 Releases of the Year. His music has been described as ‘propulsive’ (BBC Music Magazine), ‘alluring’ (Scotsman), ‘neurotic’ (Re-Diffusion) and ‘the best thing to come out of Neasden since Twiggy’ (Gramophone). Released to mark Joe's 50th birthday, this album features six works, all with typically wild and amusing titles that make you curious to find out more. Take Karembeu’s ‘Guide to the Complete Defensive Midfielder,’ for example, a work that combines influences from jazz, contemporary classical, and post-minimalism, inspired by YouTube videos of the French footballer Christian Karembeu demonstrating the importance of short passing and the combination of movement and control. There's also ‘McNulty,’ a piece commissioned by the Fidelio Trio in 2016, that gets some inspiration from a deeply flawed character of that name in the American TV drama The Wire. ‘Elsewhereness,’ an occasional piece, written for the opening of the newly built Royal Birmingham Conservatoire, is performed by the Royal Birmingham Conservatoire Symphony Orchestra under conductor Mirga Grazinytè-Tyla (Music Director of City of Birmingham Symphony Orchestra). It explores 'the metaphysics of place, of moving from one building as it is dismantled to the new one as it rises from its foundations'. In ‘Akhmatova Fragments,’ written for soprano Sarah Leonard, he captures the fleeting moods of the poems beautifully. The two remaining pieces For Frederic Lagnau and Sikorski B are named after two composers who have been a great influence on Cutler. They are performed by Workers Union Ensemble and Cutler's collective Noszferatu respectively.

[Karembeu’s Guide] is finely played by Emulsion Sinfonietta – as are all these works – never glossing over textural intricacies and confirming the regard in which Cutler is held. For those yet to hear the earlier discs, ‘Elsewhereness’ proves a no less enticing entry into his inimitable sound world.

Cutler is a post-minimalist, lending the repetitive style new contexts. Alongside folk, pop and jazz influences are those, less likely, of football (Karembeu’s Guide to the Complete Defensive Midfielder) and TV drama (McNulty, played by the Fidelio Trio).

The Akhmatova Fragments mix Stravinskian influences with grinding, grungy moments and features the superb soprano Sarah Leonard on top form, perhaps most memorable is the haunting, saxophone-drenched Sikorski B (performed by the group Nosferatu).