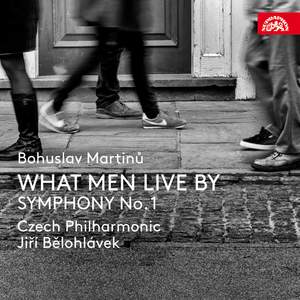 Offer, Martinů: What Men Live By & Symphony No.1

This sounds throughout, even in the numinous calling of the Lord which conjures up the composer’s familiar spooky vein, like Martinů lite…There’s a performance of the First Symphony, Bělohlávek’s... — BBC Music Magazine, March 2019, 3 out of 5 stars (Performance) / 4 out of 5 stars (Recording) More…

Recording of the Week,  Jiří Bělohlávek conducts Martinů's What Men Live By

The world premiere recording of a 1952 'pastoral opera' based on Tolstoy, captured three years before the Czech conductor's death in 2017.

Jiří Bělohlávek (1946-2017) was an important worldwide ambassador of Bohuslav Martinů’s music. For the Supraphon label alone he recorded nearly forty of Martinů’s symphonic compositions, concertos, and stage works, and many of these were world premiere recordings. Despite large-scale plans, this recording also represents both the highpoint and the conclusion of Bělohlávek’s noteworthy discography of Martinů’s works. The premiere recording of the opera-pastoral What Men Live By was made from three concert performances in December 2014 (the production earned a nomination for the International Opera Award). Martinů composed it to his own libretto in America at the turn of 1951-52, and he had a clear idea concerning its performance: "It must not be played 'pathetically', but joyfully. ... The text strongly tempts one to come up with a very serious, 'deep' conception, but that is not what I had in mind. To me, it is a rather joyful work, and what the listener must feel is not some sort of religious moral (lesson), but instead joy. The moral is in fact in the joy." This recording of the Symphony No. 1 was made in January 2016, and it joins the earlier releases of Symphonies Nos. 3-6 (SU36312, SU40072). It was part of a planned but unfortunately unfinished complete set of Martinů’s late orchestral works. Bělohlávek’s tenure with the Czech Philharmonic during the last five years of his life was a very happy time for both parties, and it led to the development of new qualities in the orchestra’s sound.

This recording shall endure as living proof of what was a very special constellation of humanity and artistry.

This sounds throughout, even in the numinous calling of the Lord which conjures up the composer’s familiar spooky vein, like Martinů lite…There’s a performance of the First Symphony, Bělohlávek’s third recording, but especially welcome in the ambiguities of the opening chords with chromatic runs within them after the glib ending of What Men Live By…the profoundly moving Largo feels totally organic, always a Bělohlávek speciality.

Martinů’s limpid score counterpoints and underlines the action with beautifully understated finesse and perfect pacing. The coupling of the First Symphony is especially poignant, the last recording of a Martinů work by the late Jiři Bělohlávek.

The first documented performances were apparently given with piano only, which seems rather a pity given the inventiveness of Martinů’s orchestration, but this fine premiere recording showcases the score’s vivid colours in all their glory. As with his recording of Janáček’s Glagolitic Mass which I reviewed recently, Bělohlávek gets the balance between solemn religiosity and rustic energy just right.