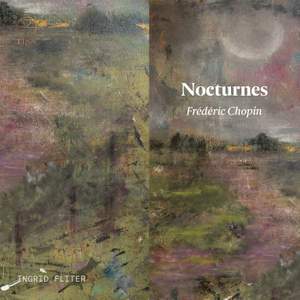 Fliter differs from most by devising a running order full of intriguing juxtapositions, as did Earl Wild. Such programming savvy makes sense if you plan on listening to all of the Nocturnes in... — Gramophone Magazine, October 2018 More…

A graceful and charismatic performer, Fliter is known for her effortless technique and thoughtful, sensitive music-making; every performance is deeply personal and full of freshness and poetry, perfect for exploring Chopin’s masterful Nocturnes.

• Chopin composed his Nocturnes throughout his creative life and succeeded in both elevating and popularizing the form. His inspirational and original style, evident from even his early works, grew and matured to create an epic collection of gorgeously melodic piano music.

• Fliter included a tantalizing taster of this new album on her Preludes recording, adding Nocturnes Op. 9 No. 3 and Op. 27 No. 2 to round off the performance, which had several critics hungry for more.

• Her Preludes album was named ‘Recording of the Month’ by Gramophone, which also named it among the top 10 Chopin performances ever recorded.

• On this new recital Fliter delights us with characteristically insightful interpretations which showcase both the sensitivity of her playing and the poetry of the composer’s music.

“Then there is Fliter’s playing, and what a pure joy it is. Fliter has a natural, utterly compelling feel and flair for this music.” The Telegraph

Fliter differs from most by devising a running order full of intriguing juxtapositions, as did Earl Wild. Such programming savvy makes sense if you plan on listening to all of the Nocturnes in one sitting…There’s no questioning Fliter’s innate affinity for Chopin, as numerous past recordings prove…Paradoxically, [she] realises her poetic potential most convincingly when she plays straight and doesn’t try so hard to interpret.

As to Fliter's playing and the individual interpretations, these are on the whole fluent and smooth. Fliter highlights the contrasts in mood between the individual Nocturnes, which her chosen sequence was presumably designed to do. It may also have determined some unusual interpretative decisions in terms of tempi and dynamics, likely to divide opinion. With lovely sound from Linn, this is a well-produced, well-thought-through survey.

There is finesse and a natural flexibility that allows every phrase to sing, but there is also a thankful lack of superficiality. Fliter applies robust tone quality in every quarter, which could so easily tip the balance towards heavy-handedness, but which actually imbues every single moment with shapeliness and self-belief. More than anything, though, these are a series of performances governed by an eager sense of wondrous exploration. There is both fresh naivety and mature authority.

Fliter certainly understands the essential simplicity underpinning some of the pieces the emotional complexity some of Chopin’s night thoughts. Rather than grouping them by Opus number she’s prepared a journey for us through the nocturnes that’s as rewarding as her playing.