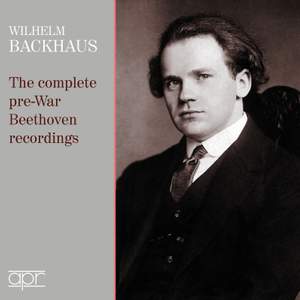 Backhaus's own transcriptions of the Serenade from Don Giovanni and the E flat Marche militaire of Schubert warrant pride of place…Technical display, as it were, is almost hidden, so that the... — Gramophone Magazine, December 2018 More…

Wilhelm Backhaus (1884–1969) left a 60-year recorded legacy which began in 1908, but though known particularly for Beethoven and Brahms in his later years, he performed a much wider repertoire before the war (as seen on the companion set APR6026) and the four sonatas and two concertos included here are the totality of his early Beethoven output. These are nevertheless important recordings – the ‘Emperor’ concerto was only the second ever recording and the first recorded by the ‘electric’ process. The 4th became an instant classic and still stands high among recorded versions. The sonatas benefit from the spontaneity of youth – the didactic and gruff presentation which occasionally afflicts Backhaus’s later complete sonata cycles is little in evidence here. Three of the sonatas were issued with Bach ‘fillers’ and we have included these here to reveal yet another side of Backhaus’ musicianship.

Backhaus's own transcriptions of the Serenade from Don Giovanni and the E flat Marche militaire of Schubert warrant pride of place…Technical display, as it were, is almost hidden, so that the original piece is front and centre…Backhaus has a particularly fascinating way with the development of the G major’s opening Allegro…The sonatas are a bit of a mixed bag, some superior to his later recordings, others not.

More Backhaus - very much to the profit of listeners and collectors alike.