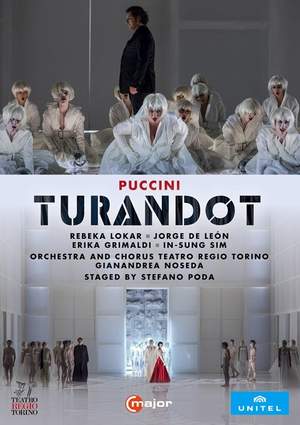 The show forges its own hallucinatory logic and looks stylish…[but] it sometimes feels as if the singers themselves are inconvenient bit-parts…Noseda will be missed at Turin, as this punchy and... — Gramophone Magazine, December 2018 More… 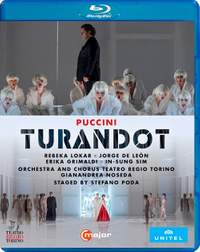 Rebeka Lokar is a ‘commanding Turandot’ (Bachtrack) and Jorge de León as the Princess’ suitor a ‘true giant’ (Corriere della Sera) with his perfect rendition of ‘Nessun dorma’. Grammy Award nominee Gianandrea Noseda impressively conducts the Orchestra and Chorus of the Teatro Regio ‘as modern as you have rarely experienced it. Chapeau!’ (Operalounge). Stage director Stefano Poda dedicates himself to bring Puccini’s Ancient Chinese setting to life. To achieve an aesthetic and conceptual unity, his work also encompasses set and costume design as well as lighting and choreography. 'Extraordinary Turandot' (La Repubblica); 'The icy Turandot inflames the Teatro Regio!' (Corriere della Sera).

The show forges its own hallucinatory logic and looks stylish…[but] it sometimes feels as if the singers themselves are inconvenient bit-parts…Noseda will be missed at Turin, as this punchy and incisive performance reveals. Overall, speeds are brisk but there is plenty of atmospheric detail…Grimaldi’s Liù is really the true heroine here, given the production’s skewed emphasis…Still, it’s a pity that the Slovenian soprano Rebeka Lokar gets so little input into Turandot, as she attacks those murderous high notes in juicy and vibrant voice.

[The production] – like Puccini’s opera itself – is open to a wide variety of interpretation; if necessarily ambiguous it is equally resonant and visually fascinating…Grimaldi’s Liù possess a substantial voice that can nevertheless float easily up to the crucial high notes…Noseda gives a fluid and (in a welcome sense) restrained account of Puccini’s blockbuster…Lokar’s approach is more notable for lyricism than sheer decibels, while retaining an impressive sense of flow.