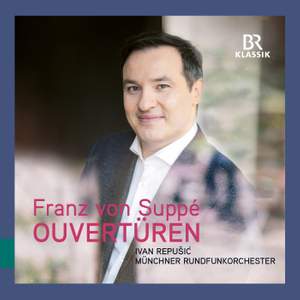 Franz von Suppé is one of the most famous Austrian composers of the 19th century, and his oeuvre includes nearly three dozen operettas and light operas as well as countless farces and comedies. His most famous operettas are The Beautiful Galatea (1865), Fatinitza (1876) and Boccaccio (1879). Although most of his stage works have now been forgotten, overtures such as Light Cavalry, Poet and Peasant or Morning, Noon and Night in Vienna were indispensable parts of Viennese operetta's 'golden age', and have remained a regular feature of the city's musical life, including at the Vienna New Year's Concerts, to this day. As Chief Conductor of the Münchner Rundfunkorchester, Ivan Repušic has selected some of Suppé's best-known and most popular overtures for his new studio production. Recorded in May 2018, this album anticipates the 200th anniversary of the composer's birth in 2019.

A worthwhile addition to a light classics collection.