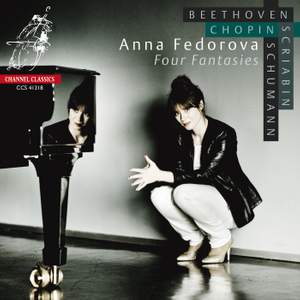 Fedorova has been playing Chopin’s Fantaisie for years, and it shows; her excellent performance proves to be the disc’s high point. The pianist’s well-integrated tempo relationships between sections... — Gramophone Magazine, November 2018 More…

We are proud and happy to announce our collaboration with the young pianist Anna Fedorova. On her debut recording with Channel Classics she shares her four favorite fantasies with us: “We all have lots of fantasies which we often love to dive into. In music - Fantasie is one of the freest genres which each composer explores in his own way and I thought it would be fascinating to dive into the fantasy world of several magnificent composers. For this particular CD I chose some of my favorite fantasies which I have been performing during the last couple of seasons.”

Anna Fedorova is one of the world's premier young pianists. From an early age, she demonstrated an innate musical maturity and outstanding technical abilities. Her international concert career took off while she was only a child, and audiences around the world were stunned by the depth and power of her musical expression.

Fedorova has been playing Chopin’s Fantaisie for years, and it shows; her excellent performance proves to be the disc’s high point. The pianist’s well-integrated tempo relationships between sections help to ensure a unified narrative flow, while deftly navigating the music’s emotional shifts between gravitas and abandon…it’s gratifying to hear how this talented pianist’s artistry has evolved since her previous solo release.