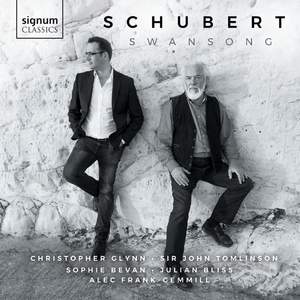 all works sung in English translations by Jeremy Sams

These songs of love, foreboding, longing and anguish hit you with raw force. This is the voice of a more mature lover, true, but Tomlinson’s dedication to text and nuance is vigorous as ever. — The Observer, 21st October 2018 More…

VI. In der Ferne "Far Away"

Titled by the works first publisher following Schubert’s death, Swansong (Schwanengesang) D 957 sets sets the words of poets Ludwig Rellstab, Heinrich Heine and Johann Gabriel Seidl in songs that cover a variety of different emotional states. The lighthearted Love Message (Liebesbotschaft), with its rippling accompaniment, addresses a murmuring brook with the hope of true love. The bone-chilling Doppelgänger with its stark, slowly tolling chords, finds the protagonist crazed with a nocturnal vision of himself agonizing at the empty doorstep of his lost love. Renowned for his clear diction and powerful voice, Sir John Tomlinson brings his insight and nuance to these profound works.

Reminiscent of the scoring for The Shepherd on the Rock and composed in the same year, On the River (Auf dem Strom) combines soprano, clarinet and horn in a setting of a poem by Ludwig Rellstab. Originally given to Beethoven who did not live long enough to set it, Schubert took up the words in a work that is a subtle homage to the composer.

The 1828 work The Shepherd on the Rock (Der Hirt auf dem Felsen) sets words by Wilhelm Müller and German playwright Helmina von Chézy, and was composed in gratitude to the soprano Anna Milder-Hauptmann. Here performed by Sophie Bevan and Julian Bliss, it tells the story of a shepherd lamenting the distance between him and his beloved before a reflection on loneliness and grief. The final section celebrates the arrival of spring in a hopeful conclusion.

These songs of love, foreboding, longing and anguish hit you with raw force. This is the voice of a more mature lover, true, but Tomlinson’s dedication to text and nuance is vigorous as ever.