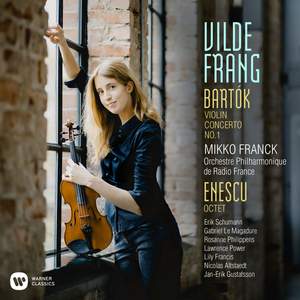 Frang rises to the works' passionate lyricism and dazzles in partnership with Mikko Franck and the Orchestre Philharmonique de Radio France. — BBC Music Magazine, December 2018, 5 out of 5 stars More…

Bela Bartok and George Enescu were born in same Year - 1881, Bartok in the Austrian-Hungarian city of Nagyszentmiklos (today Romania), Enescu in the Moldovian town of Liveni-Botosani (today Romania). Both pieces on this recording are youth works of theirs - 1900 (Enescu Octet) and 1907 (Bartoks 1st violin concerto). Both works were neglected - Enescus Octet for nearly a decade due to the challenges of the piece (being premiered in 1909) , and Bartoks concerto was neglected by its dedicatee, the violinist Stefi Geyer (who was also his young love), and was published only after her death, in 1956 (being premiered in 1958). Bartok and Enescu both died in self-chosen exile - Bartok 1945 in New York, Enescu 1955 in Paris - yet both were respected and admired for being contributers to the development of their countries’ culture and art, particularly as great «ambassadors» for the folk music.

Frang rises to the works' passionate lyricism and dazzles in partnership with Mikko Franck and the Orchestre Philharmonique de Radio France.

Absolutely stunning. Had the Heifetz-Piatigorsky team tackled Enescu’s string Octet, I doubt that they would have topped this version by Vilde Frang and friends...What most absorbs me about this wonderful piece are its rich ingredients, an aspect that Frang and her collaborators appear to relish to the full.

Frang and friends make a gutsy, quasi-orchestral sound in Enescu’s Octet of 1900 (so much so that I had to check that the recording didn’t use the version which the composer sanctioned for full string-section), with plenty of gypsy dash in the outer movements in particular; an entirely persuasive bit of advocacy for a piece that really deserves to be recorded and performed more often.

This is a marvellously played pair of works by the contemporaries Bartok and Enescu...Enescu’s precocious Octet in C is a magnificent structure, realised here by wonderful soloists including Frang and the violist Lawrence Power.