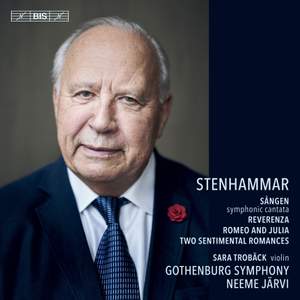 Whatever the composer’s mood or manner, from full- throated vocal cries to intimate chamber delicacies, Jӓrvi clearly believes in this music. So does the Gotherburg Symphony, the orchestra Stenhammar... — BBC Music Magazine, November 2018, 4 out of 5 stars More…

'In a way it is odd that Stenhammar may be best known for a comparative trifle - the Entr'acte from the huge cantata Sången ('The Song'). This is an encore for basically all Swedish orchestras touring abroad. So why limit oneself to recording just that? Well, because the Cantata demands quite big forces - 4 soloists with demanding parts and 2 choruses on top of a quite large orchestra. It has only been commercially recorded once before, by Herbert Blomstedt, and I happen to know that it has been on Neeme Järvi's wish list for decades. All the better now that, when he has turned 80, we were finally able to fulfil his dreams, and with extremely good forces at that: four brilliant soloists, the two choruses and Stenhammar's own orchestra, the Gothenburg Symphony in their splendid concert hall. Concert Master Sara Trobäck does full justice to the Two Sentimental Romances and we have something as unique as a movement for oboe solo in the middle of the Suite. The recording includes live material, and all the necessary performance tension and musicality pervade these readings' - Robert von Bahr, CEO of BIS Records.

Whatever the composer’s mood or manner, from full- throated vocal cries to intimate chamber delicacies, Jӓrvi clearly believes in this music. So does the Gotherburg Symphony, the orchestra Stenhammar himself conducted from 1907 to 1922.

The main event is Sången…If it’s possible to be too inspired, Stenhammar is here…The Two Sentimental Romances do what they say on the tin, with particular sweet-toned playing from concertmaster Sara Trobäck.

BIS have done great service over the years to the music of Wilhelm Stenhammar and this superb disc continues that proud tradition. The singing and playing are out of the top drawer throughout and Neeme Järvi clearly has the measure of the music, all of which he conducts with great empathy.

This choral masterpiece is presented here in a fine performance. Audio is excellent and the complete text/translations are provided. A major issue!