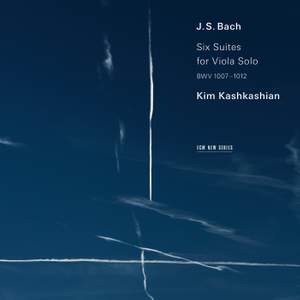 I couldn’t imagine a more dignified or sublimely expressed account of the C minor’s Prelude than Kashkashian’s…Her handling of the oft-excerpted Sarabande has a winning sense of stillness about... — Gramophone Magazine, October 2018 More…

The poetry and radiance of Bach's Cello Suites (BWV 1007-1012) are transfigured in these remarkable interpretations by Kim Kashkashian on viola, offering "a different kind of sombreness, a different kind of dazzlement" as annotator Paul Griffiths observes.

One of the most compelling performers of classical and new music, Kashkashian has been hailed by The San Francisco Chronicle as "an artist who combines a probing, restless musical intellect with enormous beauty of tone." An ECM artist since 1985, she approaches Bach's music with the same commitment as revealed in her other solo recordings, the legendary Hindemith Sonatas album and the widely acclaimed (and Grammy-winning) account of Kurtág and Ligeti.

Amongst the viola player's many other important recordings on ECM is another Bach disc - of 3 Sonatas for Viola da Gamba und Cembalo (BWV 1027-1029) - with Keith Jarrett playing the harpsichord.

I couldn’t imagine a more dignified or sublimely expressed account of the C minor’s Prelude than Kashkashian’s…Her handling of the oft-excerpted Sarabande has a winning sense of stillness about it…Viewed overall, Kashkashian delivers handsomely on all fronts and I extend a warm welcome to her expertly engineered new set.

Recordings of the Bach Cello Suites played on the viola are well into double figures, but this new one from Kim Kashkashian certainly belongs among the top of the class. Her interpretation unites elements from historically informed performance practice with consistently imaginative playing that has an almost improvisatory quality.