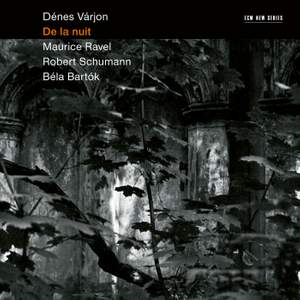 Várjon moves swiftly between numbers, joining the puzzle-pieces without ever giving us the complete picture…but there’s no doubt that [his] connecting intelligence makes each set as a whole indispensable…This... — BBC Music Magazine, November 2018, 5 out of 5 stars More…

"Negotiating dynamic shifts of emphasis," The Independent has noted, "Dénes Várjon displays that most valuable of gifts: the ability to play in a way which makes you listen anew to the familiar." This capacity is to the fore in the pianist's sensitive exploration of Schumann's Fantasiestücke, Ravel's Gaspard de la nuit and Bartók's Im Freien ? a journey through three worlds of poetic imagination.

As Jürg Stenzl writes in the liner notes. "All three works were bold forays into fundamentally new music that far transcended the limits of their time. They require pianists for whom transcendent virtuosity is second nature." The album was recorded at Auditorio Stelio Molo RSI, Lugano in April 2016, and produced by Manfred Eicher.

Várjon moves swiftly between numbers, joining the puzzle-pieces without ever giving us the complete picture…but there’s no doubt that [his] connecting intelligence makes each set as a whole indispensable…This is an unremittingly bewitching programme and perfectly engineered.

Várjon’s Schumann is a good deal more successful than his Ravel…With his Hungarian compatriot [Bartók], Várjon is suddenly in his element. The sound world of Out of Doors is far better suited to his technique and temperament.

Each work has an unconventional format, a mood of fantasy, and a programmatic element. Várjon’s brilliant technique and imaginative approach make a strong narrative out of each.