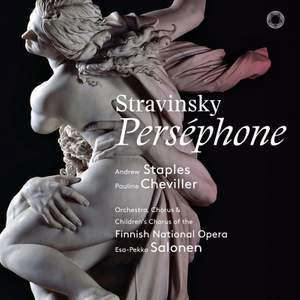 Orchestral textures are clean yet sensuous, rhythms exactingly precise...In lesser hands, the score can seem episodic. Salonen, however, forges it into a unified drama, in which not a note or... — Gramophone Magazine, October 2018 More…

Stravinsky’s Perséphone (1934) is a dynamic music-theatrical narration of the myth of Persephone’s abduction to the underworld and return to earth. The transparent, sober but evocative music epitomizes Stravinsky’s sensuous take on Neoclassicism, and the piece showcases Stravinsky’s eclectic, original and highly personal approach to music and musical drama through a playful mixture of several genres – melodrama, song, chorus, dance and pantomime. Ultimately, Perséphone offers Stravinsky’s second ode to spring, albeit without the brutal excesses of Le Sacre.

This album was recorded live during the Helsinki Festival 2017 with a star cast featuring English tenor Andrew Staples and French actress Pauline Cheviller. They join forces with the Finnish National Opera’s chorus, children’s chorus and orchestra, conducted by Esa-Pekka Salonen, in a breath-taking performance that lifts out the piece’s transformative power.

Orchestral textures are clean yet sensuous, rhythms exactingly precise...In lesser hands, the score can seem episodic. Salonen, however, forges it into a unified drama, in which not a note or word seems wasted…The choral singing is warm and focused...Cheviller, meanwhile, plays the title-role with great sincerity…this is an exceptional achievement, and the best recording of Perséphone that I know.

Sensuous, vulnerable and imperious by turns, the young French actress Pauline Cheviller is absolutely riveting as the eponymous queen of the underworld (a spoken role in Stravinsky’s 1934 ballet), with tenor Andrew Staples incisive and urgent as the narrator Eumolphe. Salonen presides over a taut, edge-of-the-seat performance, with some stand-out woodwind work as Perséphone descends to Hades.

As Esa-Pekka Salonen’s beautifully modulated performance demonstrates, [the work's] inconsistencies do not matter at all when the music is unfolded with such meticulous attention to detail. Nothing is forced, and all the elements, sung, played and spoken, are integrated so carefully…There are moments when the sound of the orchestra seems recessed slightly too far behind the voices, but every morsel of detail in the scoring, which uses a large orchestra with chamber music-like fastidiousness, is there, and glowing.