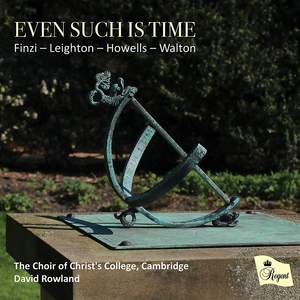 Even Such Is Time

A lot of thought has gone into this programme of English choral works. Occasionally the singers, especially the tenors, sound a little stretched. — BBC Music Magazine, August 2018,

Leighton: What love is this of thine?

Howells: Even such is time

Centrepiece of the programme is Leighton's extended cycle for Lent and Holy Week Crucifixus pro nobis,together with Finzi's large-scale anthem Lo, the full, final sacrifice and Howells's poignant motet on the death of President Kennedy Take him, earth, for cherishing. There are also rare recordings of shorter works by these three composers together with three of Walton's most popular a cappella choral works.

Music has played an important role at Christ's since the earliest days of its 500-year history. The Chapel Choir was originally made up solely of male voices, the upper parts being sung by boy trebles. Since 1979 the sopranos and altos have been predominantly Christ's students.

Today's Choir is widely recognized as one of Cambridge's finest mixed voice ensembles. In addition to singing two services a week in the College Chapel the Choir regularly gives concerts around the UK (including a number each year with a professional orchestra in St Martin-in-the-Fields and St John's, Smith Square). Each year an extended tour is undertaken to Australia, New Zealand or North America. The choir has made a number of recordings with Regent Records.

A lot of thought has gone into this programme of English choral works. Occasionally the singers, especially the tenors, sound a little stretched.