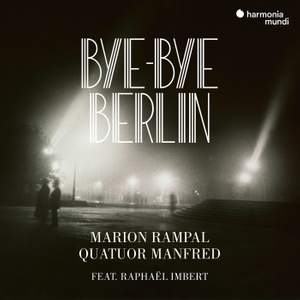 The seductive voice of Marion Rampal and an ensemble of superb musicians present a thrilling programme of subversive Brecht-inspired songs and music from 1920s Germany. — BBC Music Magazine, August 2018, 4 out of 5 stars More…

Meyerowitz: The Barrier: Help me Lord

The Ruins of Berlin

Bye bye… or Berlin for ever? Throughout the 1920s all eyes were turned towards Berlin. Driven by a collective energy, artists of all persuasions (writers, painters, architects, filmmakers and composers) there established the principles of ‘New Objectivity’, which saw the city become the very epitome of modernity, at the same time as following in the footsteps of other great cities worldwide, not least New York, the birthplace of jazz.

Life in Berlin was not the stuff of romance however: strikes, poverty, repression, the rise of Nazism… The post-war social context contributed to the craze that swept the capital for cabaret, a kind of safety valve that allowed for a moral and social release.

It is this ephemeral, underground world of ‘Great Berlin’ as depicted in ‘The Blue Angel’ that Marion Rampal and the Quatuor Manfred invite us to rediscover here, in collaboration with saxophonist Raphaël Imbert: a liberal burst of freedom and humanity delivered with passion.

The seductive voice of Marion Rampal and an ensemble of superb musicians present a thrilling programme of subversive Brecht-inspired songs and music from 1920s Germany.

Rampal manages to offer something different to anything I’ve heard before. Much of this derives from the unusual nature of her accompaniment, a mixture of string quartet and Raphael Imbert’s raspy, bluesy sax and bass clarinet. Rampal’s delivery is free, underplaying gritty Weimar-ese in favour of something one moment gently and wistfully Gallic, the next offering something almost wildly expressionistic…A strange, often haunting album, then, but certainly not one for purists.

The mood is smoke-filled dives and The Blue Angel. A must listen: Paul Hindemith’s arrangement of Wagner’s Flying Dutchman overture for string quartet which sounds as if the sea is laced with rum. Collaborator Raphaël Imbert interjects with bluesy persuasion on saxophone and bass clarinet.

Eloquence never strays from the instrumentalists of the Quatuor Manfred, at its best in movements by Kurt Weill and the magpie-minded Erwin Schulhoff, but the sleazy, atmospheric contributions of the saxophonist Raphaël Imbert often twist items out of shape...As for Rampal’s voice, it’s a strange and often bewitching creature...but she’s attractively multicoloured and beguilingly direct in Weill’s Youkali (her best track).