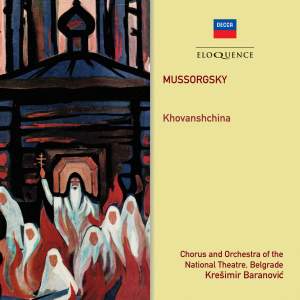 What strikes me generally is the modernity of the singing, a confidence that cleanly delivered notes and texts will do the work, without too much reliance on vocal acting…Starc is a lyrically... — Opera, December 2018 More…

Dance Of The Persian Slaves

A first release on CD for the first recording in stereo (and entirely complete) of Mussorgsky’s tragic chronicle of faith, rebellion and repression in 17th-century Russia.

With this and six companion issues to be released during the course of 2018, Eloquence makes available for the first time on CD the seven complete Russian operas recorded in 1955 by Decca with the company of the Belgrade Opera. Fresh from a successful tour of Boris Godunov in Switzerland the previous year, the Belgrade Opera in 1955 was keen to make an impression on an international public. At the same time, the Decca company perceived a cost-effective but artistically assured opportunity to expand both its small but rapidly growing stereo catalogue and its opera discography with classics of the Russian opera repertoire which it had previously not been possible to record in the original language. In the event, the stereo versions were held back for the US market. They were only released in Europe in the 1960s, by which time the Belgrade Opera had acquired an international reputation for excellence thanks both to the mono issues and to the company’s tours of the major European operatic centres.

The role of Prince Ivan Khovansky on this recording is taken by Žarko Cvejić (1907-1994), a longstanding member of the Belgrade Opera who also sung the role at the company’s Edinburgh Festival residency in 1962. Cvejić is joined by other Belgrade stalwarts such as Melanija Bugarinović, who also won acclaim as Erda at Bayreuth around this time, and Miroslav Čangalović, an acclaimed Boris of his day, as the dignified leader of the Old Believers, Dosifey.

The booklet for this newly remastered release prints both a synopsis and an essay by Peter Quantrill giving full historical context to the Belgrade opera recordings.

‘Žarko Cvejić and Drago Starc are both good as the rival brothers and Dušan Popović makes a commanding figure of Shaklovity… The chorus sing magnificently and the orchestra, under a conductor with a most vital sense of rhythm, are first rate… The various effects… are all well carried out and the successful recording of the opera is a good omen for the Boris which is to come.’ Gramophone, August 1955

‘Both Marfa and Dosifei are in good hands: Melanija Bugarinović possesses what seems to be a contralto of impressive quality and richness, while Miroslav Čangalović… is a moving Dosifey.’ High Fidelity, July 1970

What strikes me generally is the modernity of the singing, a confidence that cleanly delivered notes and texts will do the work, without too much reliance on vocal acting…Starc is a lyrically appealing Golitsin…Bugarinović gives us an imposingly adamantine Marfa……There are no librettos, but when the recorded quality, singing and (at least Danon’s) conducting are so good, that is a small price to pay.