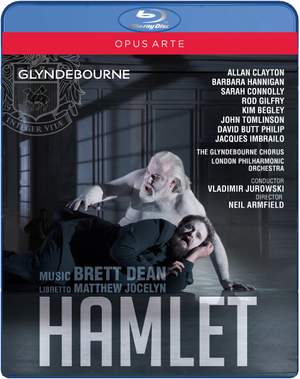 Dean’s score succeeds through rampant imagination and simple wisdom…[Clayton’s] portrayal of Hamlet’s decline would be noteworthy even without singing that is full of expressive meaning and always... — Gramophone Magazine, Awards Issue 2018 More…

Following on from our interview with the composer earlier this week, Katherine talks to the English tenor about bringing this new incarnation of Shakespeare's 'sweet prince' to life.

The Australian composer talks to Katherine about the genesis of his acclaimed 2017 Shakespearean opera, filmed at Glyndebourne last summer and now available on DVD and Blu-ray from Opus Arte.

The world premiere recording of Brett Dean’s new opera based on Shakespeare’s best-known tragedy: To be, or not to be. This is Hamlet’s dilemma, and the essence of Shakespeare’s most famous and arguably greatest work, given new life in operatic form in this original Glyndebourne commission. Thoughts of murder and revenge drive Hamlet when he learns that it was his uncle Claudius who killed his father, the King of Denmark, then seized his father’s crown and wife.

But Hamlet’s vengeance vies with the question: is suicide a morally valid deed in an unbearably painful world? Dean’s colourful, energetic, witty and richly lyrical music expertly captures the modernity of Shakespeare’s timeless tale, while also exploiting the traditional operatic elements of arias, ensembles and choruses. Matthew Jocelyn’s inspired libretto is pure Shakespeare, adhering to the Bard’s narrative thread but abridging, reconfiguring and interweaving it into motifs that highlight the main dramatic themes: death, madness, the impossibility of certainty and the complexities of action.

‘‘With a reverent but mischievous take on the text and a superb cast led by tenor Allan Clayton, this world premiere production rises to the challenge set by Shakespeare’s great play’’(The Guardian ****)

Dean’s score succeeds through rampant imagination and simple wisdom…[Clayton’s] portrayal of Hamlet’s decline would be noteworthy even without singing that is full of expressive meaning and always imbued with stringent beauty even in rage…Armfield’s production looks regally beautiful to begin with and is filled with reaction to details in the score.

What emerges is an opera in which drama has almost absolute primacy: the music seems designed mainly to heighten the drama, and the delivery of the text owes more to intense declamation than to song…Assembled here are singers of quite extraordinary calibre. Allan Clayton’s Hamlet, his warm, empathetic tenor in glorious form, is a powerful, eloquent portrayal of a young man on the edge of madness.