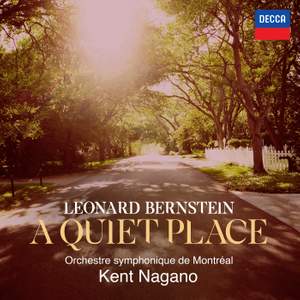 Conducted with missionary fervour by Kent Nagano, who had worked with Bernstein on the 1986 premiere, the latest revision seems to bring A Quiet Place into sharper focus than its baggy predecessor...this... — The Guardian, 28th June 2018, 4 out of 5 stars More…

Prologue..."The path of truth is plain and safe”

Dialogue 2. “She wasn’t exactly what you would call a beautiful woman”

Dialogue 7. “Welcome to the Family.”

Dialogue 8. “Say, who’s that character with…”

Readings "Who can find a virtuous woman?" & Choral “God has his ways”

Finale “Merry Christmas to you too, asshole”

Aria “I wish I could sleep"

Scene “What are you doing?”

“First, I would like to sing you a little song”

Scene “The one and only cereal”

Scene “I like it here! You mean, maybe you would…”

Aria “Stop. You will not take another step!”

Aria “You see, Daddy, that death does bring some relief”

Decca Classics and the Orchestre symphonique de Montréal are proud to present the world premiere recording of the chamber version of Leonard Bernstein’s ‘A Quiet Place’, adapted by Garth Edwin Sunderland. It is conducted by Kent Nagano and will be released on 22nd June, ahead of the Bernstein centenary on 25th August 2018.

Premiered in 1983, Bernstein’s opera ‘A Quiet Place’ was the composer’s last work written for the stage and remains one of his lesser known large-scale compositions. The concert-version presented on the new album features a chamber orchestra and was recorded live at the Maison symphonique de Montréal in May 2017. Garth Edwin Sunderland’s adaptation offers a compact presentation of the three-act opera which places equal focus on librettist Stephen Wadsworth’s dramatic narrative and Bernstein’s complex and highly developed late musical style.

Kent Nagano was introduced to Bernstein by Seiji Ozawa in 1984 and studied with him until his death in 1990. Nagano says, “For Bernstein music was life – the two were synonymous, inseparable. He never stopped exploring and pushing his own compositional language. The goal in this particular adaptation is to allow the spirited brilliance and poetic depth of the work to shine through – including dance rhythms and elements of American folklore. Our hope is that the timeless and universal quality of the piece and the genius of the composition are laid bare in this new recording.”

Conducted with missionary fervour by Kent Nagano, who had worked with Bernstein on the 1986 premiere, the latest revision seems to bring A Quiet Place into sharper focus than its baggy predecessor...this is a very personal meditation on loss and its consequences, and Nagano’s cast...make its seriousness very clear.