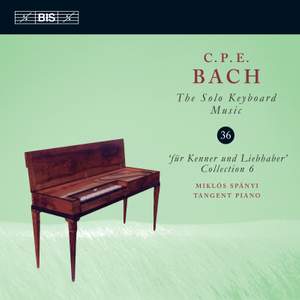 Carl Philipp Emanuel Bach published the first collection in his series ‘for Connaisseurs and Amateurs’ in 1779, at the age of 65, and the sixth and final in 1787, a year before his death. Throughout the series he continues to develop the three genres which are featured in it – sonata, rondo and fantasia. In the sixth collection, the fantasias and rondos continue to resemble each other in structure and in stylistic features: abrupt tempo changes, disruptive rhythms, and constant harmonic non sequiturs. Bach gives them ample dimensions, but as in previous collections he continues to reduce the length of the sonatas, to the point that Sonata No. 1 is the shortest work of the collection, although it is in three distinct movements.

On this amply-filled disc, Miklós Spányi also includes four other works from Carl Philipp's last decade which in various ways underline the composer's boundless curiosity. The Sonata in G major, Wq 65/48 was composed for an experimental keyboard instrument with a bowing device coupled to it – a ‘Bogenclavier’ – while Bach in the set of variations Wq 118/9 gives us his own take on La Folia, the harmonic scheme that almost a century earlier had inspired composers such as Corelli, Marin Marais and Vivaldi, as well as Bach’s own father, in the famous ‘Peasant Cantata’.