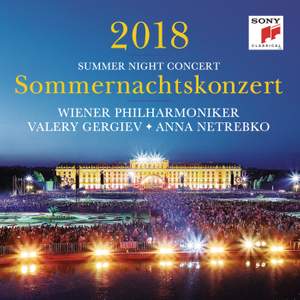 Prokofiev: Montagues And Capulets (from Romeo and Juliet)

The Summer Night Concert of The Vienna Philharmonic is the world's biggest annual classical open-air concert set in the magical Schönbrunn Palace Baroque park in Vienna. The concert will take place on 31 May 2018 and its theme for this year is 'An Italian Night'. The concert is broadcast on TV and radio in more than 60 countries, and thus reaches an audience of millions. The evening’s repertoire is an attractive combination of extremely popular works for orchestra including the William Tell Overture, the March from the opera Aida and the Intermezzo from Cavalleria Rusticana, as well as famous Soprano arias like Vissi d’arte, vissi d‘amore from the Opera Tosca. Valery Gergiev returns to conducts the Summer Night Concert and is joined by star Soprano Anna Netrebko in what promises to be one of the most popular concerts this year!