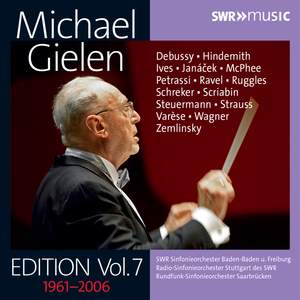 Petrassi: Concerto No. 1 for Orchestra

No. 1, Wiegenlied (Version for Soprano & Orchestra)

This seventh installment of the Michael Gielen EDITION contains the most first releases so far. The magnificent set presents works from the late romantic and early modern periods, including opera scenes. It also contains the oldest recording of the whole edition: Goffredo Petrassi’s Concerto per orchestra No. 1 (January 1961, Baden-Baden) and nearly the whole programme of the concert from June 1975 dedicated entirely to American music. Austrian conductor Michael Gielen was a champion of contemporary music both in the opera and concert repertoires. He conducted many premieres during his career. He has held appointments at the Royal Swedish Opera, the Netherlands Opera, the Frankfurt Opera, the Belgian National Orchestra, the Cincinnati Symphony Orchestra, and the Southwest German Radio Symphony Orchestra, which he has remained closely associated with since the end of his appointment in 1999.