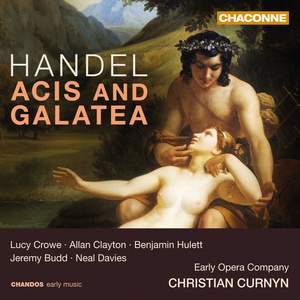 Curnyn has hit on a secret that eluded previous interpreters of this work: it was conceived specifically to showcase the beauty of the English language…Channelling Handel’s enthusiasm, Curnyn... — BBC Music Magazine, August 2018, 5 out of 5 stars More…

Act I: No. 3a, Ye Verdant Plains and Woody Mountains

Act I: No. 4, Where Shall I Seek the Charming Fair?

Act I: No. 5b, Shepherd, What Art Thou Pursuing?

Act I: No. 6b, Love in Her Eyes Sits Playing

Act I: No. 7a, Oh, Didst Thou Know the Pains of Absent Love

Act II: No. 13, Whither, Fairest, Art Thou Running

Act II: No. 15, Would You Gain the Tender Creature

Act II: No. 16a, His Hideous Love Provokes My Rage

Act II: No. 19, The Flocks Shall Leave the Mountains

The award-winning Early Opera Company under the direction of founder Christian Curnyn celebrates the 300th anniversary of the premiere of one of Handel’s most sublime creations: Acis and Galatea.

This unique interpretation is performed as Handel himself specified in the manuscript: supported by fourteen period instruments, the outstanding cast of singers takes on the solo parts as well as the magnificent choruses. This is Handel writing at his highest levels of intimacy and intensity; the music superbly supports the libretto's evocative portrayal of the story, simultaneously restrained, economical, and deeply moving.

It is exquisite music, and has been the Early Opera Company’s most frequently requested and played performance over the last few years. With the addition of Baroque experts Lucy Crowe and Benjamin Hulett, previously featured on the award winning Chandos recording of Serse, this album in surround sound is not only an extraordinary achievement for the company but a must-have for all early music lovers.

Curnyn has hit on a secret that eluded previous interpreters of this work: it was conceived specifically to showcase the beauty of the English language…Channelling Handel’s enthusiasm, Curnyn and his fellow artists forge a musical rhetoric powered by native sonorities…Lucy Crowe as Galatea excels especially in turning words, and word-pictures, into sound…This is, altogether, a benchmark that will be hard to beat.

The recording at St Jude-on-the-hill is lovely and spacious. Producer Rachel Smith and engineers Jonathan Cooper and Rosanna Fish are to be congratulated.

Secure of ripe, rounded tone and exemplary as to diction, Davies avoids the comic bluster that so often mars the role [of Polyphemus]…Crowe’s Galatea is also appealing, her singing bright and characterful, attaining tragic dignity after the death of Acis…Clayton is an admirably ardent and virile Acis…The orchestral playing is excellent, with particular plaudits going to the oboists.