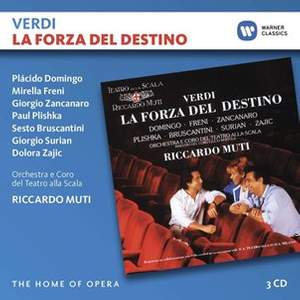 Verdi has always formed a cornerstone of Riccardo Muti’s career, most notably during his 19 years as music director of La Scala, Milan, Italy’s iconic opera house. It was with the forces of La Scala that Muti recorded La forza del destino, a work of epic scope with a richly varied score that contains some of Verdi’s most sublime inspirations. At its heart is a pair of ill-fated lovers, Leonora and Alvaro, sung here by Mirella Freni (in a role she never performed on stage) and Plácido Domingo.