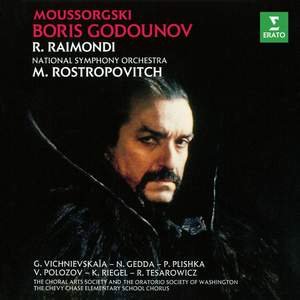 "Well, what's got into you?" (Police Officer, Chorus)

"Who are you abandoning us to, father?" (Chorus)

"Orthodox people! The boyar is implacable ... Glory be to Thee, Most High Creator, on Earth!" (Shchelkalov, Chorus)

"Did you hear what the godly people said?" (Mityukha, Police Officer, Chorus)

"You have been writing all the time" (Grigory, Pimen)

"They are ringing for matins ... Boris! Everyone trembles before you" (Chorus, Pimen, Grigory)

"What are you doing! Accursed rogues!" (Varlaam, Missail, Police Officer)

"Where are you, my betrothed" (Xenia, Fyodor)

"It's all our parrot's fault" (Fyodor, Boris)

"On the azure Vistula under a shady willow" (Chorus, Marina)

"I do not need you today, Rusya" (Marina)

"Think again, Tsarevich ... And quickly we shall capture the domain of Muscovy!" (Rangoni, Marina, Chorus)

"It is her! Marina!" (Marina, Dmitry the Pretender)

"Well, is the mass over?" (Chorus, Mityukha)

"Oh, what are you saying, boyars!" (Shuisky, Chorus)

"Gracious Sovereign! ... My story will be simple and short" (Shuisky, Boris, Pimen)

"Down here! Sit down on the stump" (Chorus)

"The sun and moon have grown dim" (Missail, Varlaam, Chorus)

This recording of Boris Godunov, conducted by Mstislav Rostropovich, became the soundtrack of a film by Polish director Andrzej Żuławski. The star of both, charismatic Italian bass Ruggero Raimondi, praised Rostropovich’s decision to use Mussorgsky’s own version of the score by saying: “I always believe that genius expresses itself with simplicity.” Rostropovich’s wife, Galina Vishnevskaya sings the Polish princess Marina Mniszek, also providing a cameo as the Hostess. Paul Plishka, an American of Ukrainian heritage, is the solemn Pimen, while veteran tenor Nicola Gedda sings the Simpleton, leaving his erstwhile role of the Pretender (Grigoriy) to the impassioned Vyacheslav Polozov.