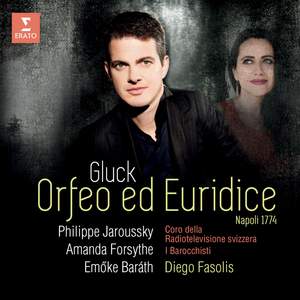 The French countertenor placates the Furies with singing of celestial purity on this world premiere recording of the 1774 Neapolitan version of Gluck's most popular opera.

Star countertenor Philippe Jaroussky continues his exploration of operatic settings of the Orpheus myth with the most famous of the many operas inspired by the story of the Greek poet who searches for his dead wife in the Underworld: Gluck's Orfeo ed Euridice. It contains one of the world's best-loved operatic arias, Orfeo's restrained, but moving lament, 'Che farò senza Euridice'.

Conducted by Diego Fasolis, his is the world premiere recording of a version of the opera that was performed at the Royal Palace in Naples in 1774, 12 years after Orfeo ed Euridice was staged in Vienna as the first of Gluck's 'reform operas'. In these works Gluck emphasised simplicity of form and directness of expression, consciously rejecting the extravagances of opera seria, which dominated the early 18th century and was typified by convoluted plots and extended showpiece arias.

2017 brought the release on Erato of Jaroussky's own retelling of the myth, La storia di Orfeo, which comprised arias by three Italian composers from the 17th century - Monteverdi, Rossi and Sartorio. His Euridice was the Hungarian soprano Emőke Baráth, who in the Gluck opera moves over to the role of Amor, god of love. Euridice is sung in the new recording by the American soprano Amanda Forsythe, who already features in the Erato catalogue alongside Jaroussky in Agostino Steffani's opera Niobe, Regina di Tebe.

Jaroussky is an engaging Orfeo, who sometimes puts expression before purity of sound...I Barocchisti, conducted by Diego Fasolis, make sure Gluck’s drama comes leaping vividly from the loudspeakers.

Small wonder that Philippe Jaroussky’s seraphic hero placates the Furies of hell (who are an especially thuggish bunch here) with a single aria – the crystalline sweetness of his tone is such that he seems to have emanated from the ‘puro ciel’ of the Elysian Fields himself...Amanda Forsythe comes through with flying colours, endowing music that verges on the prolix with real emotional depth.

Forsythe, her soprano bright yet soft-grained, contrasts well with Emöke Baráth, whose crisp, knowing Amor makes the prospect of a journey through the Underworld sound almost fun. Fasolis and his players wear the music lightly. As for Jaroussky, his sound isn’t always entirely beautiful, but it’s beguiling, and every syllable means something.

Diego Fasolis conducts with brio balanced with elegance, and the sound is excellent. Philippe Jaroussky is Orfeo, beautiful of tone as ever, but sounding a little dramatically wan. It’s hard to imagine this Orfeo schlepping to Hades and facing the Furies without packing carefully first: he doesn’t suggest much backbone. Emöke Baráth’s Amor sounds rather sexy – a more spirited Orfeo might consider leaving Euridice to stew where she is – but thankfully decorum is maintained and Amanda Forsyth’s pearly soprano makes the journey worthwhile. Both women relish the text.