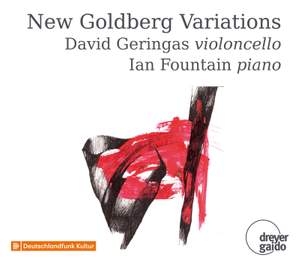 David Geringas heard about the existence of the New Goldberg Variations in 1997, shortly after the first performance, and integrated into his project ‘Bach Plus’ excerpts from John Corigliano’s Fancy on a Bach Air as an introduction to Bach’s Cello Suite Nr. 1. In 2014, while planning a CD with works by American composers, he remembered about the New Goldberg Variations, and in 2015 he performed the piece, which is exactly the length a one half of a recital, in Parma, Italy, together with the pianist Ian Fountain, who is also the pianist on this recording. One year later, while being interviewed for his 70th birthday, he concretized the idea for this CD.