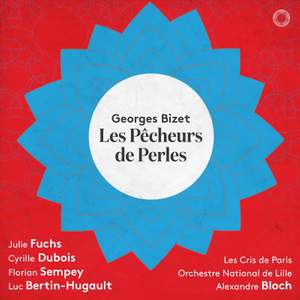 Dubois is distinctly French in the timbre of his voice and his singing style, and if Fuchs tends to spread under pressure she is lyrical when required and her coloratura is formidable…the vocal... — BBC Music Magazine, August 2018, 4 out of 5 stars More…

A QUINTESSENTIALLY FRENCH BLEND OF LYRICISM, EXOTICISM AND DRAMA

Les Pêcheurs de Perles is best known for its glorious duet, but Georges Bizet’s opera has much more to offer. This live recording more than ever brings out the brilliance of this oriental story about love, duty and friendship. In the last 150 years, Bizet’s piece has mainly been heard in editions that stray from the composer’s original composition. This album – on the contrary - offers the first recording in history of the 1863 premiere version, reconstructed and published by Bärenreiter in 2015. Les Pêcheurs de perles contains a quintessentially French blend of lyricism, exoticism and drama, and the four soloists (Julie Fuchs as Leïla, Cyrille Dubois as Nadir, Florian Sempey as Zurga and Luc Bertin-Hugault as Nourabad) belong to today’s best performers for this specialist repertoire. Their vocal excellence is matched by the choral contributions of Les Cris de Paris. The rich sound palette of Les Pêcheurs is fully brought to life by the inspired playing of the Orchestre National de Lille under the baton of its new Music Director Alexandre Bloch.

Dubois is distinctly French in the timbre of his voice and his singing style, and if Fuchs tends to spread under pressure she is lyrical when required and her coloratura is formidable…the vocal honours really belong to the chorus, Les Cris de Paris. Here’s committed singing that reminds us that Bizet’s story is not just about passion and jealousy but also about a community clinging to the shoreline in search of a perilous and uncertain livelihood.

Bloch conducts the Orchestre National de Lille in a vivid account of the score, with muscular playing driving the faster music (a terrific storm) and the exotic dance numbers…But it’s the casting of the central trio of characters where this recording triumphs, with no grit in the musical oyster… Dubois is an outstanding Nadir… Fuchs’s Leïla is no less delectable…Sempey is a superb Zurga.

Best of the four principals is Florian Sempey’s striking Zurga, a role he delivers with firmness and solidity, making something of the character’s dilemma when torn between love and a desire for revenge.

This recording is live, from concerts in Lille last year, and is hugely idiomatic, with French soloists, conductor, orchestra and chorus. Alexandre Bloch obviously enjoys Bizet’s exotic colours and keeps very tight control of his excellent forces, things never become blowsy. Julie Fuchs is a delicious Leïla, with a pure, almost crystalline soprano, and deft passagework. Florian Sempey has good weight and tone of voice for Zurga. Perhaps best of all is Cyrille Dubois as Nadir, with his fabulous voix mixte and ability to caress the line, recalling a type of French tenor that has hardly flourished in abundance since the late Alain Vanzo.