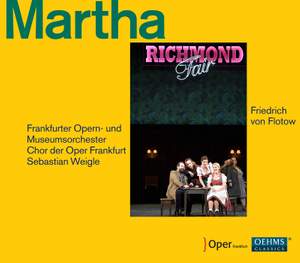 The cast seems a just mixture of novelty and experience, with Bengtsson’s note-spinning both pure and dramatically apt, and Rea managing the non-part of Tristan…with aplomb. Glueckert’s tenor... — Gramophone Magazine, September 2018 More…

With a terrific cast including Maria Bengtsson and Katharina Magiera, and under the baton of Sebastian Weigle, OehmsClassics and Opera Frankfurt bring back to live a nearly forgotten jewel of comic opera in the 19th century. After the premiere at the Viennese Kärntnertortheater in 1847, Friedrich von Flotow’s Martha or The fair at Richmond became for nearly half a century one of the most popular operas in Europe. Full of charming melodies and with a plot as hilarious as racy, the story of bored Lady Harriet Durham and her friend Nancy, who disguised themselves as Martha and Julia and travel to the servant’s fair of Richmond, where they actually not only find a job, but also true love, is an enchanting example for the 1850’s civic opera and also Friedrich von Flotow’s wonderful light hearted music. After “Der Graf von Luxemburg” OehmsClassics is happy to continue the collaboration with Opera Frankfurt with this remarkable recording.

The cast seems a just mixture of novelty and experience, with Bengtsson’s note-spinning both pure and dramatically apt, and Rea managing the non-part of Tristan…with aplomb. Glueckert’s tenor is both attractive to hear and emotionally comprehensible…Oehm’s recording is warm, clear and natural: if you want to investigate this undemanding listen, I don’t think now you need to go any further back in sonic time.

The small roles are well taken and the choral singing boasts clear diction wedded to enthusiasm. The pacing is perfectly judged throughout. It is delicious to hear solo instrumentalists quarrying some intelligent scoring.