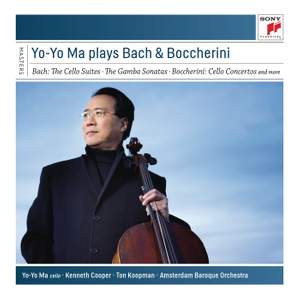 Describing the 1982 recording of the Bach Solo Suites by, arguably, the world s favourite cellist, the Penguin Guide wrote that Yo-Yo Ma s playing has a characteristic rhythmic freedom and favours the widest range of dynamic. The improvisatory effect is seemingly spontaneous and these performances are very compelling indeed, for Ma seems right inside every bar of the music. The first-class recording is very real and natural. This Grammy-winning cycle forms the heart of Sony s new 6-CD Yo-Yo Ma reissue, which also has the American cellist performing Bach s three Viola da Gamba Sonatas with harpsichordist Kenneth Cooper; transcriptions of Bach chorales and orchestral works plus cello concertos by Boccherini in collaboration with Ton Koopman and the Amsterdam Baroque Orchestra; and, for good measure, concertos and other works by Boccherini and Johann Christian Bach with the St. Paul Chamber Orchestra under Pinchas Zukerman.