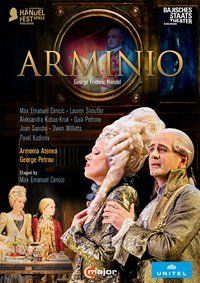 Lauren Snouffer is on sensational vocal form as Arminio’s wife Tusnelda, and Aleksandra Kubas-Kurk has a rounded security of tone as the young hero Sigismondo…Gaia Petrone sings her arias with... — Gramophone Magazine, July 2018 More… 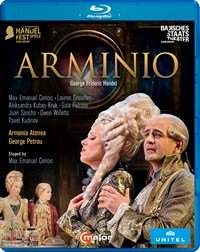 Max Emanuel Cencic excels with his celebrated and award-winning production of George Frideric Handel’s masterpiece Arminio at the International Handel Festival Karlsruhe. The remarkable countertenor Cencic, who dedicates himself to the revival and performance of the music of the 18th century, demonstrates once more that Baroque singing can be both technically brilliant and at the same time modern and emotionally engaging. His enchanting staging of Arminio is the revival of the heroic story. When premiered in 1737 at London’s Covent Garden Arminio strangely received only six performances, despite being praised as ‘a miracle’ and ‘in every respect excellent and vastly pleasing’ by contemporaries. Handel’s opera fell into oblivion – until Cencic put it into the limelight, resulting in the ‘rehabilitation of the piece’ (FAZ). Cencic’s production of Arminio, which created a furore when performed at the Theater an der Wien, features the ensemble Armonia Atenea under the baton of George Petrou and stars the stage director in the leading role: “Cencic is not only as countertenor, but also as stage director, at the peak of his success” (Süddeutsche Zeitung).

Lauren Snouffer is on sensational vocal form as Arminio’s wife Tusnelda, and Aleksandra Kubas-Kurk has a rounded security of tone as the young hero Sigismondo…Gaia Petrone sings her arias with ripe precision…There are only a couple of miniscule cuts to recitatives, and the visceral theatricality of the performance masks some clumsy tropes in the staging.

The production is essentially traditional but with an updated twist: as Germanic leader Arminio and his wife Tusnelda flee their following defeat they are betrayed, and the plot moves through the machinations of their Roman enemy Varo to dispose of them, before the tables are turned. Here, the royal couple is Louis XVI and Marie Antoinette (an idea presumably inspired by their failed flight to Varennes in 1791) rushing from the formality of the dinner table into the maelstrom of revolution, led by a Napoleonic Varo: visually, Vigée-Lebrun meets Goya with suitably jarring effect. Cencic sings another role created by Annibali with his usual aplomb. Tusnelda is the rising star Lauren Snouffer, whose even-toned soprano possesses a beguiling shimmer. Juan Sancho appears again, as Varo, and proves himself an excellent actor as well as fluent tenor. The whole cast rises to the occasion, though George Petrou’s conducting this time does fall prey to some exaggerations in its dramatic quest.