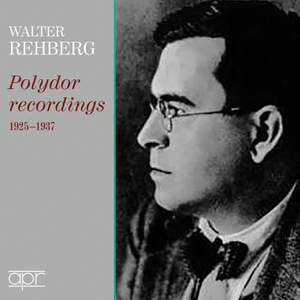 Schulz-Evler: Arabesques on themes from 'The Beautiful Blue Danube'

Rehberg: 5 Fantasies on a Theme by Verdi, Op. 2

The Swiss pianist, editor and writer, Walter Rehberg (1900–1957) was a mainstay of the German Polydor label in the 1920s & ’30s but his work has never before been transferred to LP or CD, and as a result he has faded from view. He was entrusted with the first ever recordings of such masterworks as the Schubert and Schumann Fantasies, and these and his Liszt playing reveal a true romantic virtuoso who was nevertheless equally at home in the classicism of the Haydn sonata he recorded in early 1925 – another gramophone premiere. Rehberg was a champion of the Jankó piano, an instrument which allowed the easier playing of larger intervals and complex chords. The instrument never caught-on but the pianist’s own compositions for it (disc 2, tracks 13 & 14) reveal the fascinating sonorities that could be created with it.