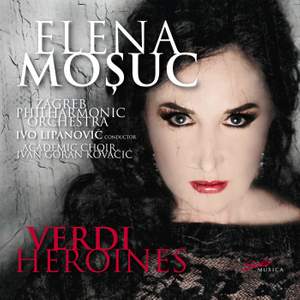 This CD contains the most wonderful opera arias by Verdi recorded by the Zagreb Philharmonic Orchestra conducted by Ivo Lipanović. Romanian-Swiss soprano Elena Moșuc, born in Iași (Romania), studied at the Conservatory George Enescu in Iași and won already several international competitions even before graduating (e.g. the international music competition organised by the German Broadcasting Network ARD). In 2017 she was nominated for the international prestigious OSCAR DELLA LIRICA. Since the beginning of her career, Elena Moșuc maintained a tight connection to the Zurich Opera House, from where she launched her international career. Frequent guest appearances have led her to some of the most famous opera houses and festivals all over the world (e.g. the opera houses of Amsterdam, Barcelona, Berlin, Hamburg, Teatro alla Scala in Milan, Munich, Vienna, Salzburg, Paris, London, Helsinki, Rome, Venice, Verona, as well as the Metropolitan Opera in New York). Over the course of her career, Elena Moșuc has established herself as one of the most versatile and expressive sopranos of our time. In addition to her opera performances, she also likes to lend her talent to other projects that spark her interest. In recent years she discovered among others Fado and Musical and has given various concerts (Operfado). She also feels passionate about film music, which led to her involvement in the new CD L’amore è poesia (Solo Musica 2016).