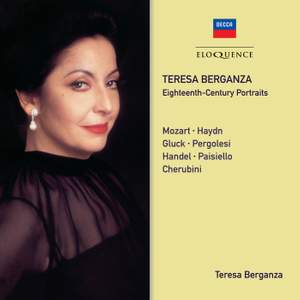 An ideal introduction to one facet of her immaculate artistry. — BBC Music Magazine, August 2018, 5 out of 5 stars

To complement a 2CD set of Rossini and Spanish song entitled ‘Brava Berganza’ (4826397), Eloquence has also reissued more buried treasure from the Decca discography of Teresa Berganza. The compilation takes its title from a 1961 album made, like the Rossini arias on ‘Brava Berganza’, with Sir Alexander Gibson conducting the orchestra of the Royal Opera House, Covent Garden, where the mezzo-soprano had made a sensational debut the previous year as Rosina in Il barbiere di Siviglia.

These portraits are of both heroines and trouser-role heroes, including Gluck’s Orfeo and Cherubini’s Medea, as well as arias from an earlier generation by Pergolesi and Handel. In all of them may be appreciated her captivating stage presence and a wide-eyed, coltish eagerness of characterisation. Back in London’s Kingsway Hall in 1962, she set down seven Mozart arias with the supple accompaniment of John Pritchard, and graced with sensitive obbligato contributions from Gervase de Peyer (in ‘Parto, parto’ from La clemenza di Tito) and Geoffrey Parsons in the concert- aria Ch’io mi scordi di te. She encompasses with equal success the impetuous ardour of the priapic page in Figaro and the contrasting sisters in Così fan tutte.

Almost twenty years later Berganza recorded more concert arias with undimmed eloquence, intensity and impeccable Mozartian style. The collection is completed by Haydn’s tragic cantata Arianna a Naxos, partnered at the piano in 1977 by her husband and long-standing accompanist Félix Lavilla. Though the interpretation had to wait until 1986 for a first issue, it is distinguished by a classical nobility of style, as well as the dramatically lived feeling for text and for the heroine’s predicament that made Berganza ‘the Carmen of the century’ according to no less than Herbert von Karajan.

‘The Berganza voice […] is surely one of the loveliest and most flexible to come along since the war. Here she gives evidence of a very firm grip on classical style … ‘O del mio dolce ardor’ […] is spun forth with great tranquillity: the vocal texture, the relaxed but never slack attack, are exactly right.’ High Fidelity, July 1961 (Eighteenth Century Portraits)

‘In Berganza’s work there are no stylistic mannerisms. She tears into the music like a violinist launching a cadenza, and her extraordinary gifts make it all the more natural sounding, giving her temperament its extroverted way… Cherubino’s songs are done to a turn.’ High Fidelity, December 1963 (Mozart arias)

‘This has always been one of Teresa Berganza’s most attractive records.’ Opera, September 1968 (Mozart arias)

An ideal introduction to one facet of her immaculate artistry.