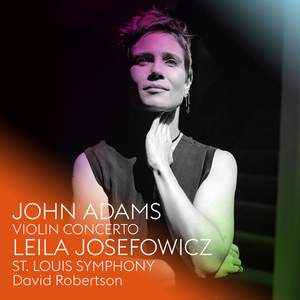 The resultant work is expansively beautiful and this fine recording from Leila Josefowicz and the St Louis Symphony Orchestra captures both the energy and lyricism of Adams’s dazzling score.... — BBC Music Magazine, June 2018, 4 out of 5 stars More…

II. Chaconne: Body Through Which the Dream Flows

Adams’ Violin Concerto was co-commissioned by the Minnesota Orchestra, the London Symphony Orchestra, and the New York City Ballet. It was described by the Boston Globe as having ‘the qualities of intelligence, craftsmanship, and quirkiness that have always marked the composer and his work; this time Adams also mingles virtuoso show with soul, popular appeal with the staying power that comes from intellectual interest.’ The premiere recording of the work, featuring violinist Gidon Kremer and the London Symphony Orchestra led by Kent Nagano, was released by Nonesuch in 1996.

Josefowicz said of the concerto in an interview with the St. Louis Post-Dispatch, “It was the piece where [Adams] first got to know me as a person and a player, when I was twenty-one… When I started playing this piece, it was the confirmation of the new path that I was on, to really go down this new road with new music and with composers, because this experience was so inspiring for me.” She further said, “It has a really dancelike feeling, so the violin line is often incredibly syncopated with everything else going on in the orchestra… Basically, it’s supposed to make you groove.”

The resultant work is expansively beautiful and this fine recording from Leila Josefowicz and the St Louis Symphony Orchestra captures both the energy and lyricism of Adams’s dazzling score. Josefowicz is a long-standing Adams aficionado, acutely responsive to the music’s line, pacing and sense of play.

The 2018 Josefowicz vintage certainly brings with it a depth and maturation that can only be achieved through 20 years of living and breathing a work now performed by the violinist more than 100 times. Throw into the mix David Robertson’s bold interpretation with the excellent St Louis Symphony Orchestra and this recording sets a new benchmark...Faultless.

It’s a masterfully eloquent work, already not short of recordings, although never before tackled with Josefowicz’s intuitive feeling and fire. She’s inside the music from the start, spinning her silver-toned rhapsody above the mysterious sounds of a muffled orchestra seemingly climbing a staircase in the dark.

The quarter-hour first movement of the concerto never seems to let up; Adams avoids crowding the listener through a sense of unstoppable momentum. The second movement is a chaconne, ‘Body through which the dream flows,’ shot through with aching lyricism. Josefowicz is capable of the sweetest, most poignant tone; subtle dissonances unsettle the listener. Adams ensures the sense of depth and space a chaconne implies, peppered with background references to minimalism. The finale, Toccare, finds the immediacy of the recording drawing the listener in as much as the virtuosity on display.