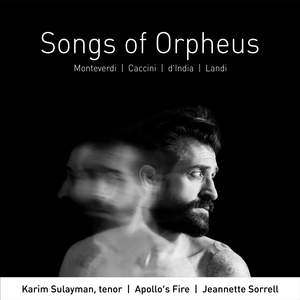 Sulayman’s approach tends more towards the lyrical than the rhetorical – his lucid, velvety tenor and pop-star charisma best suited to melodious arias rather than the text-driven stile recitativo…Under... — BBC Music Magazine, July 2018, 4 out of 5 stars More…

Lebanese-American tenor Karim Sulayman makes his solo recording debut with Songs of Orpheus, a traversal of the Orpheus myth heard through musical interpretations of Monteverdi and his 17th century compatriots. Sulayman is accompanied by leading baroque interpreters Jeannette Sorrell and Apollo's Fire.

'I Love You to Hell and Back': Karim Sulayman's neat encapsulation of the Orpheus myth infuses his solo recording debut, Songs of Orpheus. Orpheus famously followed his deceased beloved Eurydice to the gates of Hades in an attempt to bring her back to life. He was thwarted by the Gods who forbade him to gaze at her during their journey back to earth. The tale has been told in numerous musical interpretations including those of Monteverdi and his 17th-century compatriots Brunelli, Caccini, Cima, D'India, Landi and Merula, who are all represented on this imaginative album.

Sulayman’s approach tends more towards the lyrical than the rhetorical – his lucid, velvety tenor and pop-star charisma best suited to melodious arias rather than the text-driven stile recitativo…Under the spirited direction of Jeannette Sorrell, Apollo’s Fire provides slick and stylish continuo realisations.