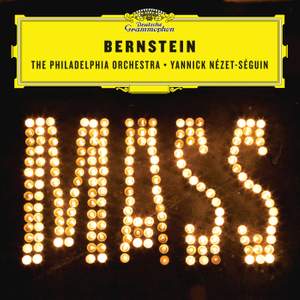 I. Devotions Before Mass: 2. Hymn And Psalm: "A Simple Song"

I. Devotions Before Mass: 3. Responsory: Alleluia

VIII. Epistle: "The Word Of The Lord"

XVI. Fraction: "Things Get Broken": c. Allegro furioso - "Why Are You Waiting?"

Jacqueline Kennedy commissioned Leonard Bernstein to compose this massive work for the inauguration of the Kennedy Centre in New York. It premiered on 8 September 1971. Bernstein decided to write an innovative Mass and what came out is, say, a Catholic Mass getting out of hand.

The Mass is seen through the eyes of a Jewish composer with an extraordinary palette of musical styles at his disposal, the work draws on influences from religious to popular and broadway musical genres.

Born out of the political and social turmoil of the 60s, its main character experiences a roller-coaster of emotions and questioning of faith. On a wide variety of levels, this work is as relevant today as it was at its inception. Nixon, then President, refused to attend the premiere after an FBI warning for fear it could contain anti-war/anti-government sentiments.

Unified under his baton, Yannick Nézet-Séguin forges a powerfully emotional interpretation of this unique work – a cross-section of European and American Music.

This extraordinary work is part-Roman liturgy, part-rock concert and part-happening. Bernstein’s notorious commitment to ‘radical chic’ sometimes hid his profound traditionalism. The writing draws heavily on the Church Mass, as well as on African-American vernacular and white secular music. Amazingly, and thanks to a joyously committed ensemble, the piece hangs together, even as a purely audio event. The first CD can seem a little chaotic in places, but from the Credo onwards, the second disc slowly builds in power and presence, and the two closing sections – ‘Fraction: “Things Get Broken”’ and ‘Pax: Communion (“Secret Songs”)’ – are emotionally powerful, even cathartic. It is Bernstein’s centenary, but perhaps more significantly nearly 20 years since his death. Without his outsize presence, his work stands out ever more strongly.