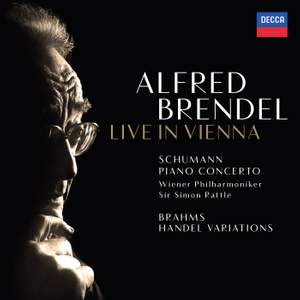 This [the Brahms] is playing of tremendous incisiveness, highly energetic in both physical and intellectual terms. Brendel traces a powerful thread of development and logic through the set’s... — BBC Music Magazine, July 2018, 4 out of 5 stars More… 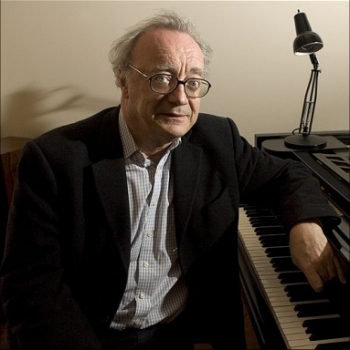 Recording of the Week,  Alfred Brendel performs music by Schumann and Brahms

Live recordings by Alfred Brendel of Schumann's Piano Concerto and Brahms's Handel Variations have been made available on disc for the first time.

Live recordings from Austrian Radio broadcasts (ORF) released for the very first time by one of the greatest musicians of all time.

The Schumann Piano Concerto requires virtually everything a pianist should have to offer: poetry, virtuosity, poised restraint – Brendel passes the test on all accounts with his passionate, insightful and refreshing interpretation.

On this Schumann Piano Concerto performance, taken from Brendel’s 70th Birthday residency in 2001, with the inestimable partners in Sir Simon Rattle and the Wiener Philharmoniker, Alfred Brendel writes that “listening to this live recording I felt that, for once, I heard what I wanted to hear”.

Brahms “Handel” Variations are what many consider to be the most imposing piece of its kind composed in the four decades that separate it from Beethoven’s “Diabelli” Variations.

A work with a wealth of different characters, colour and masterful disposition. The Fugue in particular is something to marvel at with its contrapuntal and pianistic power. Even Wagner had to concede that the result was impressive, “One sees what can still be done with the old forms when someone comes along who knows how to handle them”.

This [the Brahms] is playing of tremendous incisiveness, highly energetic in both physical and intellectual terms. Brendel traces a powerful thread of development and logic through the set’s successive variations; voicing is superb and there’s a splendid variety of touch and texture, while the whole interpretation is shot through with the adrenaline of live performance.

So do we need another account of the Schumann from Brendel? Yes, when it’s this fine...Rattle and Brendel mould a reading that ebbs and flows with complete naturalness...Brendel may have been playfully dismissive of [the Brahms] but there’s no sense of halfheartedness about this performance...This is without question an essential addition to the Brendel discography.

Brendel seems happy to allow the orchestra to come through where appropriate, and this meant that I could hear every quiet string entry perfectly. That's not to say that he is ever underpowered, however: the first-movement cadenza is impressively robust…[In the Brahms] it's a joy to listen to the range of colours and variations of tone that Brendel produces.