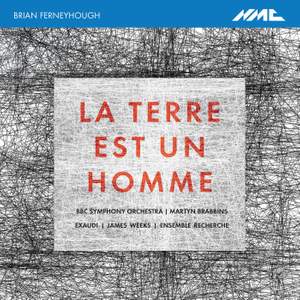 In the latter pieces the BBC SO never shirk that lightness of touch which makes listening a pleasure, while Martyn Brabbins directs with calm authority and, above all, a belief in this music’s... — Gramophone Magazine, May 2018 More…

Brian Ferneyhough is widely recognized as one of today’s foremost living composers. Since the mid-1970s, when he first gained widespread international recognition, his music has earned him a reputation as one of the most influential creative personalities and significant musical thinkers on the contemporary scene.

The monolithic La Terre est un Homme, with its 4-foot-tall score and written for an orchestra of eighty-eight, each of whom at times becomes a soloist with their own individual stave, caused a scandal at its 1979 premiere and has scarcely been heard since. The title comes from a painting from 1942 by Roberto Matta, which reminded Ferneyhough of a dream he had experienced: ‘I dreamt of a strange and alien planet traversed by a pitilessly hot sun. It was basically a desert landscape. The remarkable thing was, I seemed to be seeing every single grain of sand separately, not only in its spatial dimensions but also – somehow – in its individual weight. All was in slow, ineluctable motion. Between sharply contoured rocks scuttled tiny, scorpion-like creatures. One senses the extreme complexity but inevitability of this strange combination of leaden, slowly-moving sand and sudden flashes of intensely coloured movement.’ The second giant orchestral work on this album is Plötzlichkeit which includes three female singers, whose vocalise blends with the orchestra like a modern-day Debussy’s Sirènes. The BBC Symphony Orchestra under conductor Martyn Brabbin's direction throw themselves fearlessly into this demanding and densely notated music.

Brian Ferneyhough was just 26 when he composed Missa Brevis. Written for 12 voices and divided into three four-part choirs, it is superbly performed on this album by EXAUDI. The most recent work is Liber Scintillarum, commissioned by ensemble recherche and premiered at Darmstadt in 2012.

In the latter pieces the BBC SO never shirk that lightness of touch which makes listening a pleasure, while Martyn Brabbins directs with calm authority and, above all, a belief in this music’s potency. Ferneyhough’s 75th birthday could not have been more fittingly marked.

An uncanny allure permeates all four works here: the shifting, surrealist soundscape of La Terre est un Homme is as mesmerising as it is unsettling, whilst the dozen singers of EXAUDI acquit themselves magnificently in the forbidding but compelling Missa brevis from 1969, taking the assault-course of extended vocal techniques in their stride to create a tapestry of stark, strange beauty.

Four works spanning Ferneyhough’s dauntingly avant-garde career make a stimulating sequence...The title work, a 13-minute essay in barely relieved orchestral density, scandalised players at its 1979 premiere, but is beginning, thanks to performances such as this, to come clear.

La Terre [is] one of the most remarkable orchestral achievements of the last half-century...The effect is massive and mesmerisingly overwhelming, punctuated by rare moments of piercing clarity, when the music thins to a single line, or a becalmed, beautifully chilly chord...an exceptionally rewarding collection.

Lambert's manuscript...leaves the exact relationship between the voice and the accompaniment very approximate. Getting that alignment right was a major challenge for the baritone Marc Mauillon...The performance certainly seems to be smooth enough, if a little unrelenting, though the rather closeup perspective of the recording may have something to do with that.