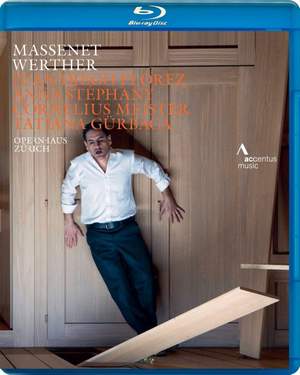 Director Tatjana Gürbaca and designer Klaus Grünberg have transformed Massenet’s masterpiece into a compelling drama that glues you to the edge of your seat from start to finish…Flórez gives... — BBC Music Magazine, July 2018, 5 out of 5 stars More…

Forbidden love, wrongdoings and anguish: the Opernhaus Zürich ventures into late nineteenth-century French romanticism with Werther by Jules Massenet. A loose adaptation of Johann Wolfgang von Goethe’s epistolary novel 'The Sorrows of Young Werther', the opera is conducted by Germany’s Cornelius Meister. It tells the story of the impossible union of poet Werther to Charlotte, a woman of duty already promised to a wealthy businessman. Goethe’s drama is echoed in Massenet’s score by emotionally wide-ranging vocal parts written on a grand scale. Juan Diego Flórez is undisputedly one of the best belcanto tenors of our times and embodies a tortured and nuanced Werther. 'It’s not a profane appearance of any singer – it is an epiphany!' gushes the Neue Zürcher Zeitung in a rave review. At Flórez’s side, Franco-British mezzo-soprano Anna Stéphany sang her role début as Charlotte. The one-room staging by Tatjana Gürbaca cleverly makes the social stranglehold of oppression tangible. Recorded at the Opernhaus Zürich, April 2017.

Director Tatjana Gürbaca and designer Klaus Grünberg have transformed Massenet’s masterpiece into a compelling drama that glues you to the edge of your seat from start to finish…Flórez gives the performance of his career as a hero who knows that death is where passion is fulfilled. Anna Stéphany’s Charlotte, by turns terrified, tender and tearful, is with him all the way.

Flórez’s Werther is a deluded loner…The voice has grown and darkened in recent years and his tight, slightly nasal quality, which suits his Rossini roles, is less evident here. The British mezzo Anna Stéphany sings an accomplished Charlotte, dignified, contained, her lines sensitively phrased and coloured…Meister reins in the Philharmonia Zurich at the right moments so they never swamp the singers, yet the interludes are played for all their worth.

From both a vocal and a dramatic point of view, [Flórez’s] is a triumphant assumption: technically impeccable, rich in insights and acted with utter conviction, even when the staging asks of him something intrinsically unconvincing. One would perhaps have to go back as far as Alfredo Kraus to find such a complete interpreter of the role…Meister shows fine feeling for Massenet’s blend of drama with delicacy; the orchestra responds with a range of subtle colours to match his infinitesimally nuance approach.

Stéphany and Flórez (both bright and supple of timbre) are ideally matched vocally, and are intensely sympathetic and convincing in roles that often invite histrionic chewing of the scenery (not that there’s a great deal to chew in this case – Klaus Grünberg’s one-room set looks like it came from IKEA, but somehow it all works).