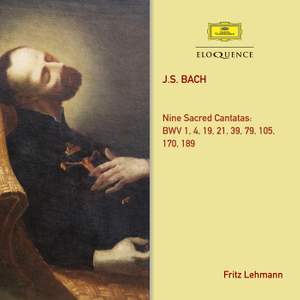 2. Versus 1: "Christ lag in Todesbanden"

The complete cantata recordings of a Bach conductor who defined performance standards of these works in his day, newly remastered and compiled together for the first time on CD. In the generation of Bach interpreters before Karl Richter who brought his cantatas to an international audience, the name of Fritz Lehmann stands out: and indeed might still have eclipsed Richter but for his early death in 1956, at the age of just 51 and significantly just before the stereo era would move recorded music into a new era. Lehmann’s recorded legacy is nonetheless significant on its own terms, made mostly for Deutsche Grammophon and encompassing the Brahms’s German Requiem, and a Christmas Oratorio which he was recording at the time of his death, completed by Günther Arndt and now reissued by Eloquence (4827637).

Of even greater historical significance, however, was the sequence of cantata recordings which he had made between 1950 and 1952 for DG’s then-new Archiv imprint of early and Baroque music. Listening in particular to the sonorous and noble solo singing in particular, few would claim these recordings to accord with ‘historically informed’ principles of performance as we understand them, but only the most doctrinaire of listeners will resist the many charms of Lehmann’s approach. The Berlin Motettenchor is a superbly disciplined vocal ensemble of evidently young voices, and from the ranks of the Berliner Philharmoniker come obbligato instrumental solos of an eloquence still to rival any recording in the catalogue (such as the oboist accompanying Gunthild Weber in the heart-stopping aria ‘Wie zittern und Wanken’ from BWV 105, Herr, gehe nicht ins Gericht). Lehmann’s choice of cantatas is also notably judicious: every single one of the works here finds Bach on inspired form, while avoiding the well-trodden territory of Wachet auf or Ich habe genug. There is the youthful Christ lag in Todesbanden, which Bach returned to throughout his career; then Ich hatte viel Bekummernis, perhaps his earliest extended masterpiece in any form; and mature Leipzig-era works of still-breathtaking ingenuity and beauty such as Wie schön leuchtet der Morgenstern and Herr, gehe nicht ins Gericht. ‘Fritz Lehmann adopts a slower tempo [than Mogens Woldike], which I personally prefer, and gives, in general, a more sensitive and imaginative treatment of this beautiful cantata.’ (BWV 105) Gramophone, May 1978

‘Listening to Fritz Lehmann's performances today I am struck by his perceptive choice of tempi which, although often tending towards the slow, are generally effective and are kept alive by the rhythmic pulse of his direction … In each of these works Lehmann captures its spirit and its individual imagery with perception and refinement.’ Early Music, July 1978