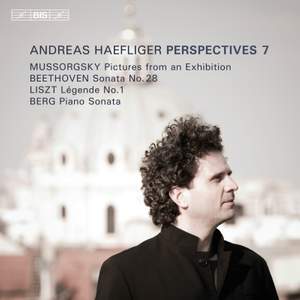 Haefliger’s rich and varied tonal colouring provides tremendous music rewards in the Berg…The coruscating flourishes in the Liszt are vividly despatched…A good deal of the Beethoven is really... — BBC Music Magazine, August 2018, 4 out of 5 stars More…

V. Ballet of the Chickens in Their Shells

VII. The Marketplace at Limoges

X. The Great Gate at Kiev 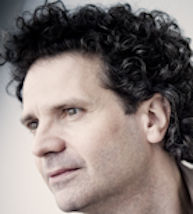 The German-born Swiss pianist talks to Katherine about his long-term project (now on its seventh instalment) exploring connections between Beethoven's piano sonatas and other works.

Since 2004, Andreas Haefliger has been devising a series of recital programmes named Perspectives, presenting them in concert and on disc. Each programme focusses on one or two Beethoven sonatas, juxtaposed with works by other composers (ranging from Mozart to Berio) which in some way or other interact with Beethoven's music, and with each other. The seventh instalment in the series was premièred at the Edinburgh Festival in 2017, and was described by one reviewer as 'inspiringly commanding, thoughtful, lucid and sheerly beautiful' (The Herald, Glasgow). Perspectives 7 opens with Alban Berg's Piano Sonata, Op. 1, a highly concentrated work in which most of the music can be traced back to the two opening gestures. This is followed by Liszt's impressionistic Legende No. 1 'St. Francis of Assisi: The Sermon to the Birds', in which we seem to hear a flock of birds chirp warble and sing. At the core of the programme is Beethoven's Op. 101 Sonata – a work which in Haefliger's opinion points more clearly towards Schumann than any other of the composer's sonatas. But the grand finale of this amply-filled disc (86 minutes!) is nevertheless a highly colourful and expressive performance of Mussorgsky's Pictures at an Exhibition, recorded – as is the entire disc – in the exceptional acoustics of the Mozartsaal of the Vienna Konzerthaus.

Haefliger’s rich and varied tonal colouring provides tremendous music rewards in the Berg…The coruscating flourishes in the Liszt are vividly despatched…A good deal of the Beethoven is really impressive and thoughtful, with some marvellously humorous touches in the finale…The most striking aspect of Haefliger’s [Pictures] is his astonishingly inventive approach to the Promenades.

As the core work, the Op. 101 Sonata comes off beautifully, the opening and slow movements are thoughtful, inward and flexible, and the scherzo and finale as articulate and mercurial as you could wish for…Sensibility and refinement are hallmarks of Haefliger’s Berg to…Haefliger takes his time over quite a few of Musorgsky’s Pictures, probing them for sonoristic and expressive nuances that not many others care to explore.